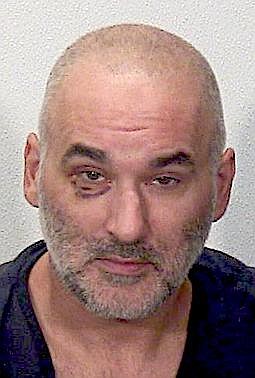 A man who was overheard saying he would hit himself and tell deputies that his ex-girlfriend battered him is being held on a fugitive warrant.

Brandon Brauckhoff was arrested after deputies responded 10:40 p.m. Oct. 17 to a residence on Tramway for a report of domestic violence.

The woman said she tried to leave the apartment with their 5-year-old son over the course of several arguments, but he prevented her.

She said he threatened to kill her during the arguments. She said he would hit himself so he could claim she’d done it. A neighbor said he’d been hearing the couple’s argument and that he heard a man say “I’ll hit myself and tell the police you did it.”

When deputies arrived, Brauckhoff opened the door holding frozen vegetables up to his eye after he’d been punched. Deputies said it appeared he had a slight redness on his right cheek and didn’t need attention.

A background check revealed Brauckhoff was a felon in Charleston, S.C. for pointing a firearm at someone and there was a fugitive warrant issued for him out of Indiana. Brauckhoff said he arrived in Nevada on Oct. 14 and had not registered as a felon. He was also carrying a 12-inch club shaped like a baseball bat.

He is scheduled to appear in Tahoe Township Justice Court on Tuesday.