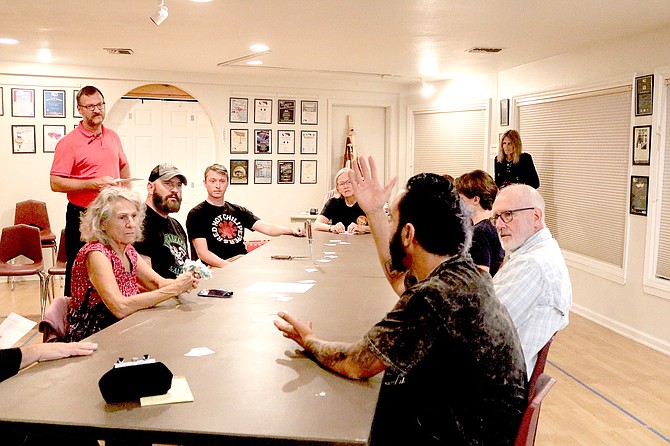 The fate of an 18-year-old man accused of stabbing his father is now in the hands of 12 ordinary and very different people in the Carson Valley Community Theatre’s production “12 Angry Jurors” Oct. 14 at the CVIC Hall.
“It kind of highlights some things in our own lives and what happens when we make rash decisions because we’re emotional,” said Freddie Baker who is playing Juror 2.
“12 Angry Jurors” was a 1954 CBS Studio One series titled “12 Angry Men,” and was later adapted by Reginald Rose. It focuses around ta jury’s deliberation of a young man’s murder trial where the guilty verdict is an automatic death sentence.
Director Jeff Bassa, who watched the original show, said this was a play he has been interested in directing for a long time.
“It works through the issues at hand in a very human way,” said Bassa. “I remember thinking of the impact it had and how that impact still holds true today.”
The original was written with an all-male cast, because during the time women were not allowed to serve jury duty. Over time, there have been countless portrayals of the production where the cast is gender neutral which has added to the different personalities the jurors can portray.
“Each juror plays their role and shows the variety of personalities and conflicts that would be experienced in a random jury pull,” said Preston Keim who is playing Juror 10.
The scene begins after closing arguments have been presented in the homicide case, the jurors are given their instructions and the deliberation room doors are closed.
As the jurors discuss, debate and tear apart the evidence of the case their own histories, prejudices and biases begin to complicate the life-or-death decision they must all come to agree on.
“It’s a very personal issue to discuss with a bunch of strangers,” said Karen Mason who is playing juror 7. “The hidden agendas, opposing personalities and opinions add to the conflict at hand and I think everyone can relate to the feelings of impatience and frustration that unfolds.”
One dissenter gradually wins over the others and they come to a decision, but not without heated arguments, tears and drama.
“It provides a valuable lesson in the difference of people and opinions and how that plays out and comes together in such an issue,” said Bassa.
The jurors are portrayed by Anita Kelley, Alex Waldron Juror, Carol Schirlls , Chris Nerska, Danny Lopez , Freddie Baker, Karen Mason , Kyle Littlefield, Maureen Burton, Nancy Deis, Preston Keim and Steve Burton. Larry Lippmann is playing the guard and Joseph Bly is the judge/voiceover.
“12 Angry Jurors” will show 7:30 p.m. Fridays and Saturdays through Oct. 22. Matinee showings are 2 p.m. Saturdays and Sundays through Oct. 23 at the CVIC Hall. Opening night is 7:30 p.m. Oct. 14. Cost, $15 seniors and students, $18 general admission and $20 at the door. For group rates call the theatre. For more information call, 775-782-6622 or visit www.carsonvalleycommunitytheatre.org

Nancy Deis moved to Gardnerville four years ago. She enjoys curling and playing with trains at the state railroad museum in Carson City. As a charter member of the Asbury Players in Livermore, Calif., she has played everything from a drunken floozy to an 83-year-old man. She joined CVCT last year as Cee Cee in “Rex’s Exes.”

Freddie Baker is a student at Douglas High School. This is her second year as both the high school’s Drama Club President and the Improv Captain. This is also her second show with CVCT, her first being “The 25th Annual Putnam County Spelling Bee.” She wants to attend UNR and get her bachelor’s degree in acting for theatre before heading to the East Coast to study at AMDA or Julliard.

Anita Kelley has performed in over forty productions in Tahoe and Carson Valley. Her favorite roles include the eccentric Madame Arcati in “Blithe Spirit,” Hanna and Diana in “California Suite,” Johanna in “August Osage County,” The Grand Duchess in “You Can’t Take It With You,” and the Pendant in “Taming of the Shrew.” She has appeared onstage in the musical productions of “Matilda the Musical,” “Mamma Mia!,” “The King & I,” “Oklahoma!,”
“Nunsense,” “Nutcrackers,” “A Funny Thing Happened on the Way to the Forum,” “Hair” and “The Polar Express” (performed on the V&T Railroad). Film credits include “Electric Boogaloo,” “10 Syllables” and “Three Clicks.” Anita has just wrapped up the third and final season of the radio broadcast, “Secrets of Harridge House,” and will be back onstage in Tahoe this winter in “Guilty Christmas.”

Chris Nerska’s sixth performance with CVCT is “12 Angry Jurors” and his third time working under Director Jeff Basa. His previous credits include “Rex’s Exes,” “Moon Over Buffalo,” “A Funny Thing Happened on The Way to The Forum,” “A Trip to Bountiful,” and “California Suite.” His day job is teaching U.S. history to students in Carson City. He lives with his family and his rescue dog, Macy.

Kyle Littlefield has been with CVCT since late 2016. Kyle is a U.S. Coast Guard retiree and Montana State University Bobcat. Kyle has seen Antarctica and Sioux City, Iowa.

Maureen Burton is very excited to work with such a great cast and director for her first production with CVCT.

Karen Mason moved to Minden in 2017 with her three sons to be closer to family. This will be her first play with CVCT. Karen was involved in theatrical productions and acting from elementary school through her early college years. Since that time, she has gone on to have a career in technology and project-product management.

Steve Burton is happy to be appearing in his first CVCT production. After several successful shows in Reno and Carson, Steve is branching out to Gardnerville and Minden.

Carol Schirlls’ most recent appearance in a CVCT production was the character Mrs. Boyle in “The Mousetrap.” She has been involved with CVCT for 13 years and served on the Board of Directors, directed The Butler Did It, produced multiple shows, and held various positions of the production teams. Carol is a dancer and a want-to-be-singer.

Preston Keim moved to the Carson Valley area two years ago to join friends and family with his wife Jennifer who spent her high school years here at Douglas High. Before moving here, he spent the prior 20 years in the U.S. Army. He worked in various positions as an intelligence specialist, Arabic linguist, physician assistant, and special operator. Growing up in the Phoenix area as a shy and reserved young man and with his military career focus, he did not expect to find such joy in acting.

Danny Lopez is making his CVCT debut appearance in “12 Angry Jurors.” He has a number of acting credits during his early through late teens and with his strong desire to return to acting, Danny has joined CVCT and is highly motivated to continue performing in live theatre, playing in future drama and comedy productions.

Alex Waldron is excited to be making his acting debut in CVCT’s production of 12 Angry Jurors. He is an aspiring screenwriter and composer.

Larry Lippmann has been a volunteer with CVCT since 2013 and has performed in many shows as well as running lights and helping in the box office. He is a retired high school teacher who has appeared in “Rumors,” “California Suite,” and “A Funny Thing Happened on the Way to the Forum” for CVCT, and “Barefoot in the Park” and “Four Weddings” and an “Elvis” at the Brewery Arts Center.

Joseph Bly earned his Theater Arts tech and design degree from Ithaca College back in the ’80s but wound up working in emergency medicine. He has never lost his love of performing arts, recently directing Bus Stop at Brewery Arts Center, and performing in several stage and podcast productions. He is currently working at KNVC Community Radio in Carson City as the Program Director, and editing the drama podcasts, “Murphy’s Inc.” and “Secrets of Harridge House.”