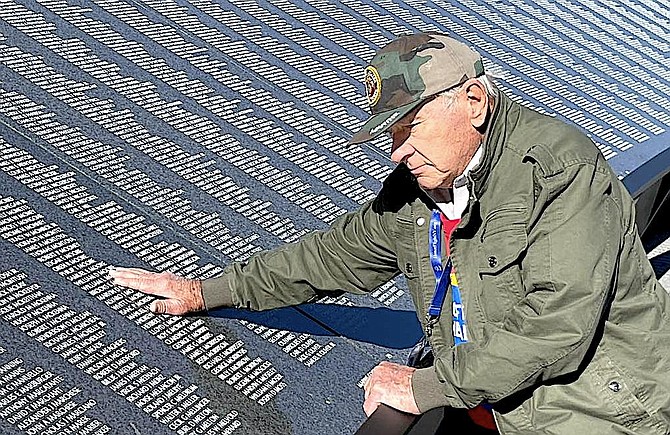 Marine veteran Jack Navone reflects after looking up the names of friends who were lost in the Korean War. Honor Flight Nevada photo

Marine veteran Jack Navone doesn’t know how he managed to make it out of the Korean War alive.

A Foothill resident, Navone, 90 going on 91, returned from last week’s Honor Flight to Washington D.C along with around 60 veterans.

He was one of only five Korean War veterans on the flight, he said.

“Looking at the monuments back there and the number of veterans who were killed, they were all 18 and 19,” he said. “They didn’t have a life. Why them and not me? I should have been on there five or six times, but I was lucky.”

Navone found some of his buddies’ names on the Korean War Monument.

“I think the purpose is to honor those veterans who were killed in action,” he said. “They took us around to all the monuments for all the veterans.”

Navone said he joined the Marines in 1949, almost a year before the Korean War broke out. He started his three-year hitch serving with the security detail on the aircraft carrier USS Valley Forge.

“I went in for three years, then Harry Truman during the Korean War issued an involuntary extension,” he said. “I stayed in until the war is over.”

Once he got out of the Marine Corps, Navone lived in Lodi, Calif., before he came to Gardnerville in the mid-1990s.

He said he was asked to participate in the Honor Flight.

“I feel lucky and fortunate they asked if I would like to go because of my service, so I said, ‘Sure.’”

He said the reception both on landing near the capital and back in Reno was fantastic.

A representative of the Republic of Korea attended and gave each of the Korean War veterans a medal.

Annexed by Japan in 1910, Korea was partitioned along the 38th parallel at the end of World War II, resulting in the creation of two separate states. The Korean War started June 25, 1950, when North Korea invaded the south. An armistice was declared in 1953.