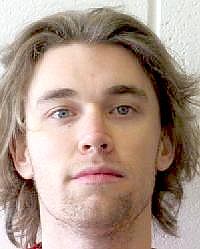 A former Carson Valley man convicted in 2020 of seducing a 15-year-old girl was denied parole last month for at least another year.

Caleb Patrick Proctor Henry, 25, was denied parole for another year.

Henry, who also goes by Demaranville-Massey, was sentenced in October 2020 to 2-10 years for statutory sexual seduction of a 15-year old girl.

Henry had prior convictions of grand larceny of a motor vehicle out of Lyon County in 2017 and possession of a stolen vehicle out of Carson City in 2019.

He had just been released from prison and was on parole and staying with the girl’s family when the incident occurred.

He told her he was 17 years old, when prison records indicate he would have been 23 at the time.

He was the subject of a two-week manhunt in spring 2020 before he was found and returned to Douglas County for sentencing.

• A Gardnerville man who received the maximum sentence of 2-6 years in February 2021 for sexual abuse of a child is scheduled to go before the parole board in November.

Like Henry, the 16-year-old girl’s family took Arellano in. He was participating in Western Nevada Regional Drug Court for a previous conviction in which he’d supplied marijuana to minors when the offense occurred.

A psychosexual evaluation found he was at average to above average likelihood to reoffend and that was key in the decision to sentence him to 2-6 years in prison.

Attorney Brian Filter argued that Arellano was not a predator and asked for probation.

Julian Amador, 21, was taken into custody on Sept. 19 in connection with the charges.

According to an attorney defending him at his bail hearing, Amador has no criminal history, and the victim lives in another state.