Sage and rabbitbrush denizens of the Sierra 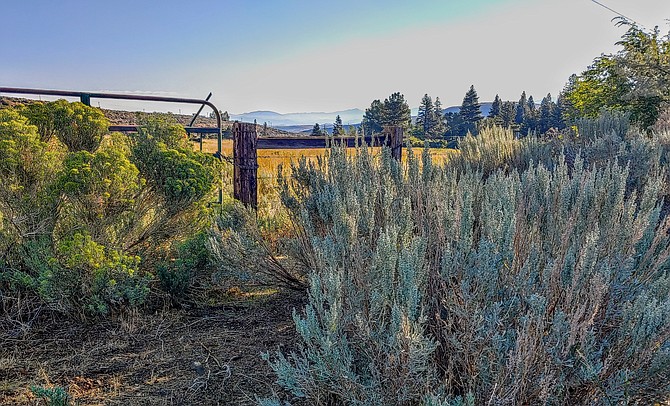 Every day begins as a blank canvas waiting to be filled with our own unique responses to the outside world. Each of us chooses how to handle the hardships and sorrows, the love and the joy. Looking out across Carson Valley as it slowly rises, beginning the ascent to the peaks of the great Sierra Nevada, one can take in a deep breath of the pungent sage and be inspired. The landscape in both Douglas and Alpine County offers a natural lesson in tenacity, perseverance, and strength.

Many take little notice of bushes that grow here, but these hardy survivors deserve special attention. Seasonal temperatures, winds, soil composition, and availability of water make this a challenging place to set down roots. Only certain species of plants are able to flourish. Studying how they have made it can give us clues about how to live here ourselves.

Big sagebrush “Artemisia tridentata” is one of our most common shrubs. It is a perennial that reproduces from seed. If you grab a piece and crush it between your hands it emits the most pungent, clearing, and earthy scent. Walking through a sage field, or standing in one after a rainstorm, is a memorable experience. Big sage averages 3 feet in height but can reach up to 10 feet under the right conditions.

The genus name honors Artemis, the Greek goddess of untamed nature. It is aptly chosen, reminding me of a line from an old jazz song: “Nobody can cultivate me: I’m as wild as wild can be.” Of course, it is possible to propagate sage, but as it dances across the fields and up into the juniper-pinyon woodlands, it appears entirely undomesticated and unkept. It certainly does not conform to the idea of a manicured garden.

The species name (tridentata) is Latin for “three-toothed” and refers to the shallow lobes across the top of the wedge shaped leaves. These leaves remain over the whole of the winter season, poking their soft gray-green heads out through the snow. Even the stems of the Big Sage are notably eccentric. They are formed of layers that make twisted, sculptural armatures raising up to the heavens.

There are subspecies and other varieties you can find, such as black, sand, silver, or fringed sage. It is another opportunity to notice the subtle differences that come from a close and studied observation.

Though cattle do not like to eat Big Sagebrush, sheep, goats, deer, rabbits, and squirrels are said to browse it, particularly in the winter. It may not be their first choice, however. There is quite a long list of little known Native American uses for it, including rope and sandal making. The pioneer settlers just burnt it since it was known to create exceptionally hot fires.

The close companion of Big Sage is rabbitbrush, and they are seen growing together everywhere in the open fields. I know far too many people who suffer from severe allergies once the rabbitbrush rears its shiny head at the end of each summer season and on into early fall. The genus name is Greek for “Golden Shrub,” and it indeed seems to consider itself royalty. Dense clusters of small yellow flower heads are bright and stand out in a showy fashion next to the more demure sage.

There are references to Native use of the flowers to produce yellow and orange dyes. The species name is Latin for “nauseous” and refers to the odor of the crushed leaves. It can grow up to 6 feet but is commonly half that size.

In 1959, the sagebrush was chosen as the State Flower of Nevada. Growing in poor soil, with little water, it has a long taproot that tethers it tightly to its chosen location, making it difficult to pull out. Hopefully some of the traits of big sagebrush are shared with the people who inhabit the same geographic area. I would like to think that we are also hardy, immovable, and have a deep sense of humbleness. Sage does not need to go bragging to its neighbors. Its greatness does not long for fanfare, but rather keeps to itself: confident, independent, and self-sufficient.

As the elevation increases, these two are joined by bitterbrush and desert peach, with pink blossoms like a roughhewn desert cherry tree. Eventually manzanita (translated as “little apple”) joins in and the edges of the forest intermingle with the broad open sage fields. The East and West Forks of the Carson River rumble down out of the Alpine County canyons. The land is dominated by plant genus that grow naturally here, untended by human dictates or design. These mountains and valleys are some of the most spectacular on this earth and the big sage and rabbitbrush are a large part of the distinct and stunning aesthetic.