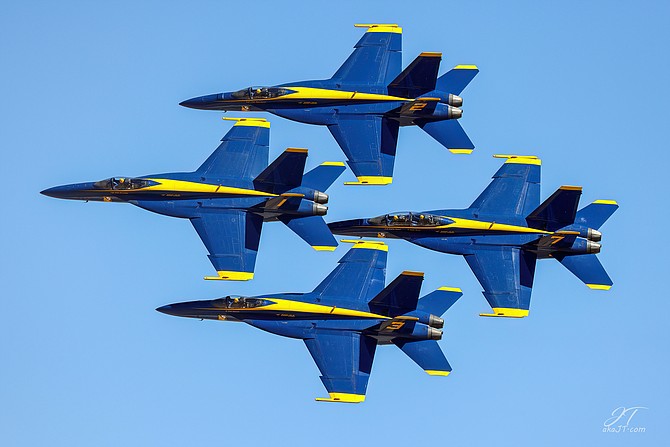 The U.S. Navy Blue Angels fly over Minden on Thursday.
JT Humphrey | Special to the R-C

If you have seen the Blue Angels before, you haven’t seen them like this year’s Aviation Roundup, said Blue Angels Pilot No. 3 Lt. Scott Goossens.

The Aviation Roundup featuring the Blue Angels is today and Sunday at the Minden-Tahoe Airport.

Expect significant traffic along Highway 395 through Carson Valley over the weekend as visitors arrive and depart from the air show. The jets will be flying over most of the Valley as their pilots perform, so motorists should pull over if they want to watch them.

“There’s going to be a lot of excitement,” said Goossens. “This is the first time we are flying with the Super Hornet and Super Hercules, so the audience will get a chance to see some aircraft we have never shown before and it’s going to make for an exciting show.”

This is Goossens first year in the Aviation Airshow. He joined the Blue Angels in September 2021 and has accumulated more than 1,600 flight hours. His decorations include the Navy and Marine Corps Achievement Medal and various personal and unit awards. Being a part of the Blue Angels had always been a childhood dream for him.

“I grew up in San Francisco and watching the airshow that comes there and it really sparked my interest then as a small kid, that this must be the coolest job in the world,” said Goosens.

Part of the Blue Angels’ mission and the airshow is to promote a connection between aviation and the community.

“That’s the very nature of these aviation shows, is being able to interact with the American public and showing them what the men and women in service do,” said Goossens. “To be able to show the kids and inspire them and the power of that is a privilege and special opportunity to be a part of.”

Traffic will be directed to the airport along Airport Road and Heybourne Road.

Minden-Tahoe Airport Director Bobbi Thompson said there are three parking areas available. One for General Admission, VIP and Handicap parking. A map showing where each lot is located can be found online at www.aviationroundup.com/copy-of-flights-rides

Eleven buses are available to transport people from the parking area to the main gate.

“The VIP area fills up pretty quick, but the general admission is more than accommodating to the number of vehicles we will have during the weekend,” said Thompson.