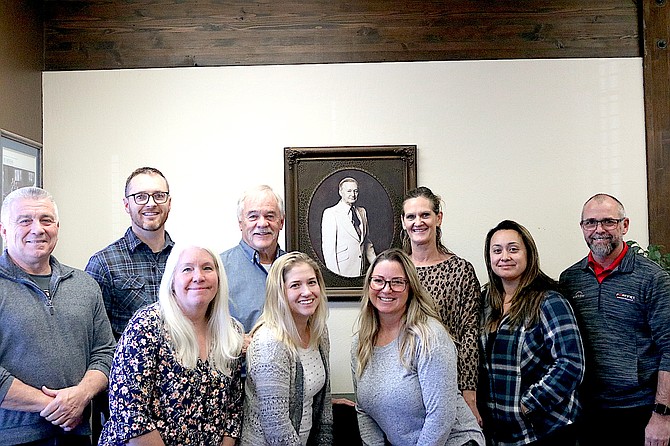 What started as a side hustle in Warren Reed’s living room of his Eighth Street house 75 years ago, has grown into a three-generation regional insurance agency, known as Warren Reed Insurance.

“We’ve grown from a small agency to a regional agency,” said Alan Reed, the son of founder Warren Reed. “We’ve done that through modest growth each and every year, serving our customers and building life time relationship in our community. “

The operation started in 1947 when Warren Reed, a truck driver for the Minden Flour Milling Co. started “peddling Insurance.” A year later he was renting a single room in the Farmers Bank building in downtown Minden for $20 a month.

Since then the company has expanded from its base in Gardnerville, to satellite offices in Twin Bridges, Montana and agencies in Arizona, Idaho and California.

Over 75 years, Warren Reed Insurance has developed a sense of family with their personal and commercial customer base offering coverage tailored to their individual needs from homeowners, automobile, health, life and benefits and Farm and Ranch.

“It’s not just about us, it’s about everyone here,” said Reed. “It is a family here; the Warren Reed family and we take care of each other.”

To celebrate their anniversary, the business wanted to keep it “low-key,” but thank the community for years of support.

“It’s really just about saying thank you,” said Taylor Reed, Alan Reed’s son. “We wouldn’t be here if it wasn’t for the community.”

Taylor said the company did celebrate by providing everyone at the agency “founded day” off, which was April 1.

“We take it off every year as a in memory day for Warren and the start of the business,” said Taylor.

Reed added that the ties of his father and what he started is what is remembered on their founded day and as the business celebrates their 75th anniversary.

“He’s gone, but not forgotten,” he said.

Moving forward, Warren Reed Insurance hopes to grow modestly while continuing to serve and build relationships to the individuals, families and businesses they serve.

“We are grateful to still be a small business that has grown up,” said Reed. “We continue to grow, but our heart is still here in the Carson Valley.”