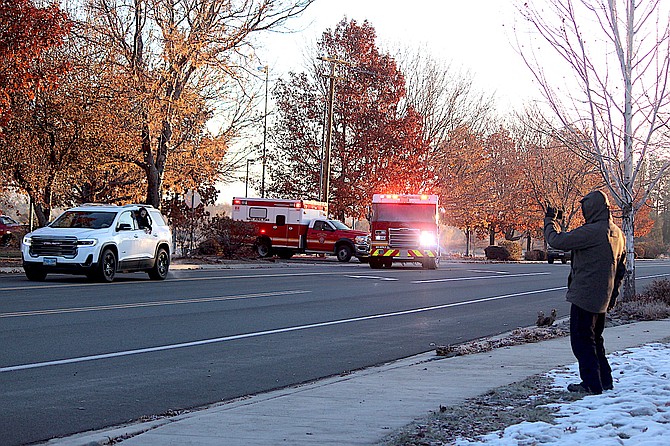 A bystander videos the escort for the Douglas Pop Warner team to their first playoff game on Saturday morning.
Photo by Kurt Hildebrand.

Genoa, Nev. — The Douglas Tiger 8U Pop Warner Team’s season ended on Saturday at the hands of a Bay Area team. They got a great sendoff from Stodick Park early that morning thanks to East Fork firefighters and Douglas County deputies.

I did the vast majority of my Thanksgiving shopping on Monday, and I expect the crowd I encountered is going to be the rule over the next few days. My advice, as a guy who has spent most of the last 30 Thanksgiving mornings in a grocery store, is to get what you need now.

A couple of collisions occurred, including one on Genoa Aspen Drive in Genoa Lakes at 1:44 a.m. today and another at Topaz Ranch Drive and Albite Road in Topaz Ranch Estates at 5:09 p.m. Monday. The TRE crash resulted in a helicopter ride for treatment.

The discovery of a deceased man in the crawl space of a Genoa Lakes home around 2 p.m. by a worker resulted in a significant law enforcement presence in the neighborhood. I’ll follow up to find out what I can.

It looks like clear sailing for Thanksgiving travel on Wednesday, but there may be some weather on Sunday. It’s still very early yet, so maybe just keep an eye on the forecast over the weekend.

It’s another chilly morning with Minden-Tahoe Airport recording 10 degrees and a spot south of Muller Lane between the rivers recording minus 1. Today, expect mostly sunny skies and a high near 54 degrees, with nary a breeze.