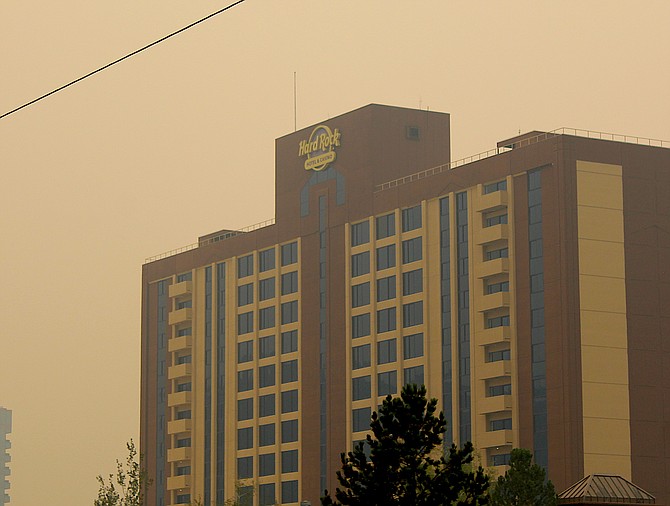 The Hard Rock Hotel and Casino on Aug. 26, four days before South Lake Tahoe and then Kingsbury were evacuated ahead of the Caldor Fire.
Photo by Kurt Hildebrand.

Stateline gaming figures for September came in four times above that of last year, when South Lake Tahoe and Stateline were evacuated for the Caldor Fire.

According to the Nevada Gaming Control Board, the casino corridor had a gamin win of $27.9 million, up from $5.6 million last year.

The evacuations ahead of the Caldor Fire occurred on Aug. 31, 2021, and affected Kingsbury Grade Oliver, Kahle Drive, Lake Village and Round Hill. The Stateline casinos were exempted because they were housing firefighters battling the blaze.

Douglas merchants went two for two in August, generating a 16.8 percent increase in taxable sales despite a $2.79 million chargeback

In the second month Douglas has had to generate its own sales tax without help from the state, merchants reported $98.5 million in taxable sales.

According to figures released by the Nevada Department of Taxation, Douglas merchants reported $98.53 million in taxable sales up from $84.38 million in August 2021. Carson City had $87.59 million, down from $129.8 million the prior year.

Data processing, hosting and related services saw a $2.79 million decline back down to more typical $20,000 after a one business mistakenly attributed the amount to Douglas. State taxation officials warned the county last month that there would be a negative amount.

The three categories related to the Stateline casinos all posted strong results during August, with food services and drinking places bringing in $12.81 million, accommodations raking in $5.63 million and amusement, gambling and recreation with $4.66 million.

Those totals are well above last year’s when the Caldor Fire was burning toward Lake Tahoe.

People were shopping in August, with the county’s general merchandise stores ringing up $11.24 million, up 4.1 percent. Internet shoppers purchased $9.17 million, up 8.9 percent from the previous year.

The building boom benefitted from a 39.4 percent increase in August, with building materials and garden equipment and supplies up to $8.7 million.

Motor vehicle and parts dealers were down 4.9 percent to $5 million while electronics and appliance stores were also down 13.5 percent to $2.24 million.

Merchant wholesalers of durable goods continued strong, with $9.34 million in sales during the month, up from $6.7 million from August 2021. Of the county’s 17 manufacturing sectors, 10 posted gains, including beverage manufacturing, which was up 21 percent to $356,172. Miscellaneous manufacturing was up 324 percent to $1.57 million.