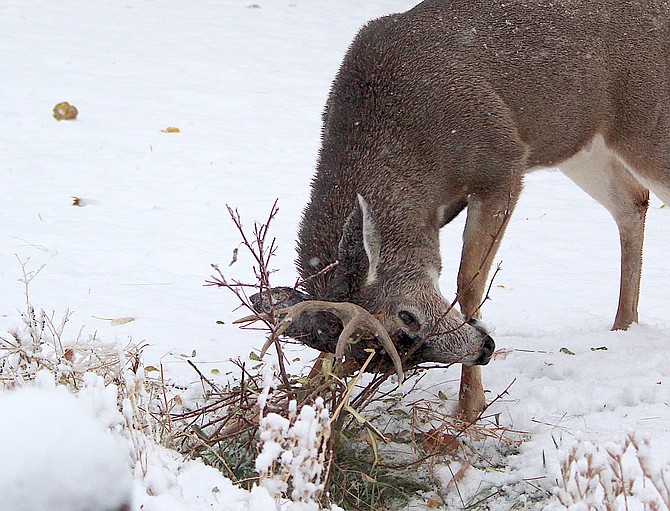 A buck vies with a bush north of Genoa.

Difference between truth and fact

This election season we have heard a lot about “truth.”  Too often we confuse truth with fact.  If two people stand back-to-back, one facing north and one facing south, one can say the sun rises on the left and the other can say the sun rises on the right or can say the sun rises in the east.  All may be true statements, but only one is an absolute fact.  Truth is based on perspective.  Truth is based on individual experience and interpretation.  Truth requires context.  Facts are indisputable regardless of person or perspective.  These subtle differences are extremely important to understand.  Both political parties and their candidates make claims about the opposition that have some truth but are devoid of facts.  As the rhetoric ramps up and the truth dwindles, I cannot be anything but disappointed in the lack of facts, lack of forward messaging, and damning claims against every candidate.  The only choice left at the state and federal level is to vote for the corruption that affects me the least.  What a choice.  As we finalize the election season, I can only hope that in the near future we are able to get away from the two party tribalism that currently inhabits our politics.  Without a third party or candidates with an independent platform the political parties push further to their respective extremes.  Candidates cannot even support legislation they agree with from the opposition for fear of appearing to work with them in any way.  No longer are we able to have a discussion about an issue with reason and fact.  When the two parties disagree on policy or how to govern, it is no longer enough to disagree or just hold another opinion.  Now the opposition must be demonized.  They must be called names, lied about, and attacked.  It prevents dialog, obscures the truth, stretches the truth, and on many levels are just outright fabrications.  The real truth, well, my truth, is that in politics liberals always start with the “Lie” and conservatives always start with the “Con”.  And the lie and the con are that they care about America or its citizens.  Politics has become a race for power and control.  Neither major political party represents this county or foundations or ideals or citizens any longer.  They just represent their own self-interest and control over its population in their own way.  If we as citizens do not fight for The Republic and democratic principles, all we will be left with is the tribalism of Republican and Democrat politics.  And that is a very sad fact.

What a disappointment that the Douglas County Commissioners would not eliminate the VHRs at Lake Tahoe in Douglas County. All of them know they are located in zoning for single family residences, and VHRs are short-term rentals.

They are allowing 600 permits which means 600 families cannot buy or rent a home in our area. This also means that in probably five year’s time, we won’t have enough students to enroll in our schools to keep them open.

How sad the Commissioners put money over the rights of the people they are supposed to represent. Money talks – as if the County won’t be getting enough revenue from the four big casinos and the new convention center which will amount to more than the funds received from VHR fees.

What a shame the Commissioners have placed upon themselves.

If anyone has recently driven North on Jacks Valley Road there is a very noticeable and conspicuously large landscape-scar within the Clear Creek Development on the forested hills adjacent to John Ascuaga’s iconic ranch and 1230-acre conservation easement. Also clearly visible are several large home sites that can be seen from Jacks Valley Road and the neighboring subdivisions of Canyon Creek, Freedom Ranch and Alpine View Estates.

Too bad Douglas County allowed the developer to oversee/govern its own Specific Plan Design Standards leaving our Community Development Director with no jurisdiction over scenic degradation issues that have been occurring for over a year now!

The following information is just a sampling from the Clear Creek Specific Plan that have been violated in my opinion. This is the perfect example why no other developer should be allowed to monitor and enforce design standards, etc. in their own specific plan.

2). “Section 1.3 Project Overview: The Clear Creek community is a residential enclave of 384 golf course homes, predominantly custom sites nestled within a natural forest setting. The integration of this community into the natural environment is respectful of the sloping landforms and abundant vegetation.”

3). “Section 2.2 Site Context Landform 2.2.1: Combined with a fairly dense forest and an exciting landform, the site is conducive for development while protecting the scenic views from offsite.”

5). “Section 2.8 Grading Concept and Hillside Development: As a general rule, all development on site is in conformance with existing Douglas County Hillside Development Guidelines. Custom homebuyers will be required to assemble a team of design professionals, including architects, engineers and landscape architects to provide a grading plan that preserves as many of the trees and as much of the existing landform on site as possible.”

6). Section 5.2 Master Plan Conformance I’ve mentioned in previous comments that there is no Table 8 (or Page 63) in the Specific Plan as referenced.

In closing, the destruction of any iconic viewshed, where many are disappearing, is egregious and shameful and just plain sad for future generations that will never get the opportunity to appreciate the scenic and rural beauty in the valley.

Note: I only state Clear Creek, not Clear Creek Tahoe.  The development can call itself anything it likes. It is not in the Tahoe Township portion of Douglas County.

Suicide Prevention Network is beyond grateful to be the recipient of the proceeds from the 2022 Intero Chili Cookoff that was held on Oct. 8.

We want to thank Dennis McDuffee and Teddy Carlson-McKone for continuing the agency’s history of supporting the community, local organizations, and residents.  A huge thank you also to Jolie McDuffee and Jenny McQuain for the hours and hours of effort put forward to make this such a successful event.

Thank you also to the 24 chili chefs and teams who provided an array of amazing concoctions of perfection.  Your generosity and the generosity of the community members who attended and supported the event with the purchase of entry and raffle tickets, as well as additional donations, resulted in Suicide Prevention Network being presented with a check for $25,000.

We are able to provide quality services and programs to our community free of charge due in part to funds awarded us by several grants we have.  Those grants, however, are for specific programs that are determined by the granters.

Any other programs and support we provide are paid for through the generosity of public donations. This money will allow us to create and implement programs and support for populations in the community we have very much been wanting to expand our services to but have not had sufficient funds to do so.

Suicide is a health crisis in our community. Suicide Prevention Network is dedicated to being the champion in decreasing suicide and its impact on our family and friends, co-workers, and neighbors by developing and providing services, training and education which promote mentally strong and healthy behaviors in the workplace, home and social setting for a safe and high-level quality of life.

Our goal is a suicide-safe community – free from the threat and anguish of loss from the devastating effects of suicide and we use multiple tools in our quest to reach that goal.

Again, thank you Intero and all the community members who worked so hard to make this a successful event!

As the program director for the Rotary Club of Minden, I have the opportunity to research and seek out interesting and productive people in Northern Nevada to address the members of our club. As we head toward the end of the year, I am focused on acquiring potential speakers who are making significant contributions to our valley. In today’s modern era of football, the current popular mantra of successful football coaches is “do your job.”

One of the people doing their job, and doing it well, is Mark Jensen, the Friends of Dangberg Home Ranch Director. Mark is the face and voice of the Dangberg Ranch in Minden, one of Nevada’s oldest ranches. Mark has been a part of the Dangberg Ranch since 2005, serving in various capacities, all leading up to his current position as Director. Mark has become an eloquent spokesperson for the Ranch and its founder, H.F. Dangberg, and his productive and sometimes eccentric family. Heinrichs oldest son H.F. Dangberg Jr. founded Minden. The 15-room main house remains a large tourist attraction, and with Mark as its spokesperson, hosts a wide variety of parties, weddings, musical performances, lectures, and Chautauqua performances.

We are fortunate to have Mark Jensen as the Director of the Friends of Dangberg Home Ranch. I’ve had the pleasure of dealing with Mark as a member of a production team producing a large event. In the negotiating phase, Mark was consistently friendly but businesslike, smart, and fair, and ensured that our event would be a success. His commitment to the Ranch and its rightful place as one of our Valley’s most important treasures is fun to watch. Mark is most certainly doing his job. He turned out to be one of the Rotary Club of Minden’s best speakers of the year.

What could be better?

In response to Joan Costas take on my Oct. 5 letter to the editor (Correct me if I’m wrong) on Oct 26. I admit that you were right Joan. Yes. The Democrats don’t run on those issues. They couldn’t. They’d never get elected. They tend to put those policies in place after they’ve been elected (Defunding police-No bail policies-Grooming kids-etc).

So, has crime has increased in Democrat run cities and states where no-bail policies are in place? Yes.

As for Antifa/BLM vs Jan 6th; “The summer 2020 riots resulted in some 15 times more injured police officers, 19 times as many arrests, and estimated damages in dollar terms up to 740 times more costly than those of the Capitol riot.” Quote from link below.

You mentioned that they were “predominantly peaceful” Joan.

As I understand from the pics and videos released, a lot of the J6’ers were ushered into the capitol building by the capitol guard and then later arrested. Those arrested were denied due process for minor crimes such as trespassing. They do call the capitol building the ‘Peoples House’ you know. The only deaths were a guard (natural causes) and an unarmed woman protester who was shot to death by a capitol policeman. He was never charged for it. Can you imagine what the press would say if a local cop did that and was not charged? The apparent instigators and damage doers I don’t think were ever arrested. Why? Were they not part of it? I’m not condoning this riot, but tell me why one is considered peaceful and the other a riot? The real truth of this ‘riot’ I feel will come out eventually.

JFK made me become a Democrat in 1971. I campaigned for George McGovern in 1972. He lost. Over the years that followed I realized that the Democrats had a decent message but didn’t follow through with their promises. That hasn’t changed to this day.

Faith/Family/Country is what I believe in, and I still say, we can do better.