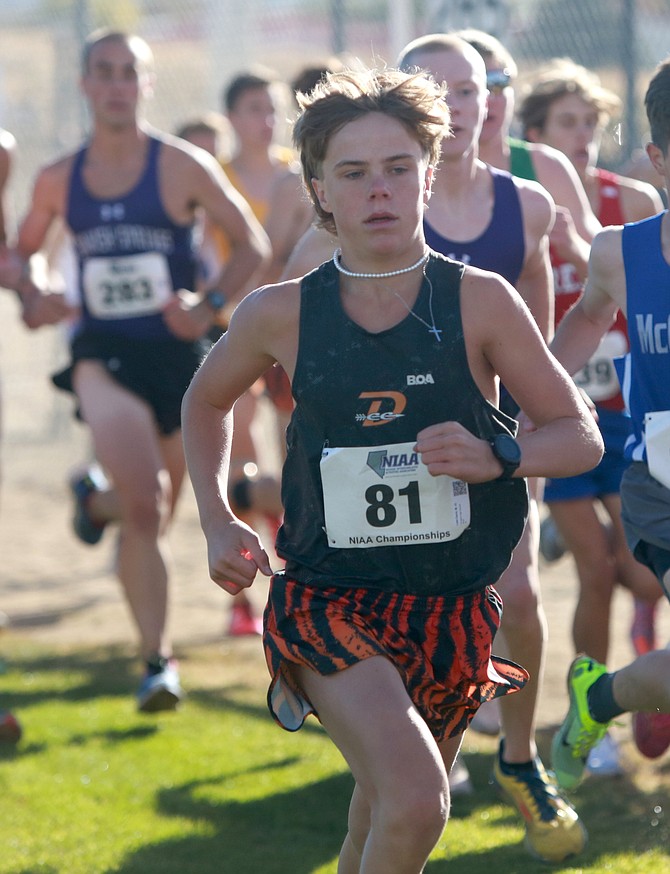 Luke Davis runs with the pack at the Class 5A North regional cross country race prior to the state meet. Davis was 15th overall in his sophomore season at the Class 5A state meet this past weekend in Boulder City.
Photo by Carter Eckl.

This past weekend in Boulder City, Douglas High School cross country had 10 runners cap their seasons at the Class 5A state cross country meet.

The Tiger boys, who qualified as a team for the first time since 2018, took 10th as a team with senior Jackson Davis leading the way.

Davis was fifth as an individual in his last high school cross country meet, finishing in 16:32.2.

Sophomore Luke Davis was 15th overall and crossed the line in 16:58.5, scoring 13 team points for the Tigers.

Senior Romaine Smokey, this week’s Athlete of the Week, took 46th in his final race in the Tiger uniform, finishing in 17:35.8 while Dennis Jorgensen was 62nd in 18:15.7.

Rounding out the boys team results for Douglas was Sage Spencer (75th) and Jacob Lewis (76th), who finished within two seconds of each other in the season’s final race.

The Douglas girls didn’t qualify as a team, but did send three athletes to compete against the best Class 5A had to offer.

Freshman Lucy Nord and sophomore Ayla Nelson had been finishing near each other all season and that didn’t change with the two taking 43rd and 44th, respectively.