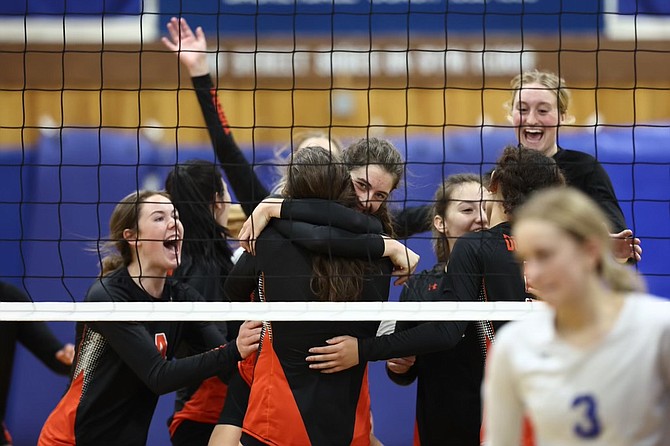 The Douglas High volleyball team storms the court after defeating Carson High in the opening round of the Class 5A North regional playoffs.
Photo by Ron Harpin.

The Tigers bested the Senators six days prior to their postseason matchup Tuesday night and it looked like the Tigers picked up right where they left off.

“It’s a challenge. I just want them to enjoy the moment and take it as a challenge,” said head coach Suzi Townsell. “The track record isn’t the best, but you know what, you never know.”

The Tigers jumped in front 7-6 and proceeded to lead every set through the finish.

Senior captain Addy Doerr dominated the opening set with four of her seven kills as well as a block to force a Carson timeout with Douglas in front, 14-10.

Doerr posted a solo block to give the Tigers a 21-13 lead before ending the first set with a put away of her own.

In the second set, a serving run from fellow captain Sofia Kolbe took Douglas from a 13-9 lead to a 21-9 with a pair of aces.

Emerson Dufloth had a kill and a block over that eight-point span while Leann Lemalu had two kills and a block of her own in that stretch.

Lemalu, a sophomore, finished the night with a team-high 12 kills.

Once the Tigers knew of their postseason matchup with the Senators, the mindset shifted.

“Immediately, I was like we’re not going four (sets). I’m not losing to Carson again,” said Kolbe. “In our mindset, we were taking Carson out no matter who was out or who was in.”

However, Douglas didn’t blink, putting the Senators away over the next three points.

The Tiger faithful traveled pretty well to Carson’s gym and the players noticed.

“We had a great student section, they helped a lot,” said Doerr. “We had good energy last time, but today (Tuesday) was even better.”

One more win for a state berth

In order for the Tigers to punch a ticket to state, they’ll have to do something few teams have accomplished this season.

Bishop Manogue was 14-2 in league play this fall with its only losses coming to No. 2 Reno and No. 3 Spanish Springs.

Since the Miners lost to the Cougars on October 12, they’ve only dropped one set over the course four wins.

Douglas has fallen in both meetings with Bishop Manogue in straight sets.

The closest the Tigers got to the Miners in any of those six sets was 25-21, which came in the first set of the first meeting.

Douglas will be riding a bit of a high Wednesday, having dropped just a single set over its last three wins.

“Keeping the mindset that we did today (Tuesday) and looking at it as a challenge,” said Chana Rothschild, who had five kills, two blocks and an ace in the regional opener. “Just stay competitive and keep the energy up.”

Either way, someone will grab a state tournament berth tonight at Bishop Manogue High School.

The match is expected to start at 6 p.m.