Striking gold in a family tree 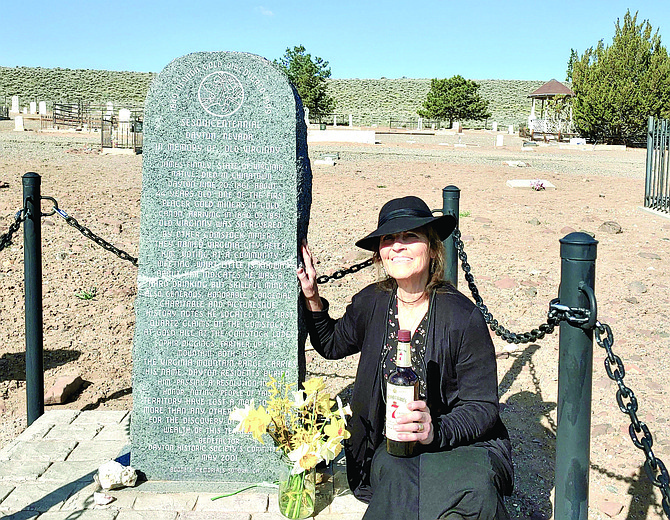 "You are of pioneer stock!” her father would gleefully shout as she worked out in the fields. He was filled with pride at her prodigious capacity for hard physical labor. Decades later, Susan Korngold still drives her own backhoe, hand tills her extensive garden, maintains the irrigation ditches, and does all the difficult clearing necessary on her Alpine County ranch.

Her property includes the charming and immaculately cared for Quail Hollow Airbnb, bordering the West Fork of the Carson River. Remarkably, it also lies along a portion of the Carson River Route of the Old Emigrant Trail. Although known by a few different names, this was not only the shortest way to the California gold fields but the most popular one between 1848 and 1851.

In his fascinating guidebook Gold Rush Trail, Historian Frank Tortorich provides real insight into the mindset of gold-seekers after the first big discoveries in both California and what subsequently became the state of Nevada. Tortorich writes that the attitude of the day was that the land was “theirs for the taking”. The sad but true fact is that the previously undisturbed and stable history of tribal lands throughout the United States was completely overrun during these decades.

Woodfords Canyon, right here in Alpine County, held a big part in the unfolding of this unprecedented onslaught of settlers. Following the Tortorich guide, you will find that physical evidence still exists of this complicated period of time. Men were coming in droves trying to make their fortune finding gold. Though steep and treacherous, the canyon was the easiest way to cross the foreboding Sierra Nevada.

When Susan found out recently from a cousin who was redoing their family tree that she was related to James Fennimore, she was taken aback, and had to marvel. She really was from pioneer stock, as her father had somehow intuitively known. Following the line from Susan’s grandfather, and going back five generations, there you will find the illustrious James Fennimore, half-brother to Susan’s great-great grandfather.

James was known by different monikers such as Old Virginia, Ol’ Virginny, and Virginny Finney. His nicknames varied widely in their spelling and usage. You could spend all summer reading the tales that have become their own form of Virginia City mythology. It is easy to find conflicting stories about this larger-than-life character. From the sources available, it seems highly likely that he must have walked the Gold Rush Trail bordering his descendant Susan’s property.

This is not a scientific fact-finding hypothesis, but more the stuff of a wonderful daydream. It is easy to imagine her long-ago relation hiking hands-in-his-pockets along the lower part of this old thoroughfare, admiring the magnificent rough-hewn cliffs behind Susan’s home on his way to Gold Canyon. Maybe he was daydreaming too, just as we are.

Original source material is hard to come by, but there are a few things that seem to be more probable. There is a voluminous amount of material that has been written about him. Perhaps the most important is that he was at a pivotal place and time in American history, and possessed something that made him stand out from the crowd.

Though much has been written about his love of whiskey, it seems unlikely that a truly irritating drunk would be able to persuade anyone to name the iconic “Virginia City” after him. What was that spark, and what is the most accurate account?

Did he actually break a whiskey bottle and christen the town himself?

If so, it is noteworthy that the entire population agreed to keep it thus. The American penchant for “tall-tales,” could be said to have started with reporters in Virginia City. During that period, facts were far less important than “telling a compelling yarn.”

In the spring of 1851, Col. John Reese arrived in Carson Valley and started a store, naming it Mormon Station, right in Genoa. Documented in Nevada Historical Society Papers as it was originally written, Reese reported that when he arrived the nearest other settler was a man in Gold Canyon who had a trading post and wintered there in a kind of small dug-out. He wrote that: “The man who lived in Gold Canyon was nicknamed Virginia and it was after him that Virginia City was named. I don’t know what his real name was. He discovered those mines there where the Comstock now is. He had a reservoir fixed in the Canyon to wash the gold out.”

Reese went on to write about what transpired between Virginia and miner Henry Comstock. The Virginia City mining district ended up being named for Comstock. Reese recounted that, “Comstock found the ledge and he worked there for some time, and I guess Comstock and his party bought Virginia out. The latter did not live but a little time afterwards. His tent was about a mile above the road that ran up & down the river at the lower part of (G)Old Canyon where the emigrants road was.” He wrote, “Virginia was drunk a good deal through drinking whiskey. His tent was on the side of a hill, half underground, covered over with rags or any old stuff.”

Conflicting information exists about every detail of how Old Virginia died, but almost all accounts contain the same two elements: a horse and whiskey. The Daily Alta California of July 1861 reprinted a Territorial Enterprise article about Finney’s passing, noting that, “During his residence in this Territory, though at times dissipated, he always bore the reputation of being an unusually kind-hearted and honest man. Peace to his ashes. All good men should respect the memory of the hardy and generous old pioneer.”

So, Susan Korngold raises a toast to her new-found, long-lost relative, “Cheers to you, dear Old Virginia!”. Finney’s adventurous soul brought him to travel across these lands and take his part in transforming them. We can look back on history and try to find out the truth about it, but we cannot change it. Virginney Finney was a colorful character of mythic proportions in the chronicles of the Westward Expansion. He ventured into unknown land, unafraid, unencumbered, willing to meet his destiny head-on. In the end, maybe he journeyed this specific trail, and maybe he didn’t. It reminds us that our past is not a long dead relic to be buried, but a vital reminder of what an important part we each play in determining the shape of our world.