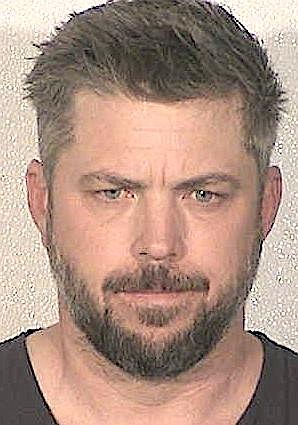 A federal grand jury has indicted a man, who was arrested a year ago for harassing a deputy and his wife related to a mask requirement at a Carson Valley elementary school.

Justin Andrew Hall, 31, was arrested in New York on a federal charge, according to Douglas County prosecutor Erik Levin.

He was supposed to be in Minden on Monday for a competency hearing. During the hearing, Hall’s appointed attorney Brian Filter was allowed to withdraw from the case by Judge Tom Gregory.

Filter said Hall had been trespassed from his office and home.

Gregory issued a $50,000 cash nationwide bench warrant to get Hall back to Douglas. Levin said that it was likely the case would be dismissed in favor of the federal prosecution, and that he would likely require another defense attorney to accomplish that.

Hall was indicted for being a prohibited person in possession of a firearm on May 19, according to federal court documents.

Hall and Aaron Rasavage, 44, were arrested May 13, 2021, after the incident at a Gardnerville grocery store.

Hall was wearing a sidearm when he accompanied Rasavage to the store and was still wearing it when deputies arrived at his Ranchos residence.

He was prohibited from carrying a firearm after a conviction for domestic violence on March 2, 2017, in Storey County, according to the federal indictment. Under U.S. and Nevada law, no one convicted of domestic battery is permitted to possess a firearm.

Rasavage is scheduled for an Aug. 30 jury trial on charges of violating an extended order regarding stalking, according to Levin.