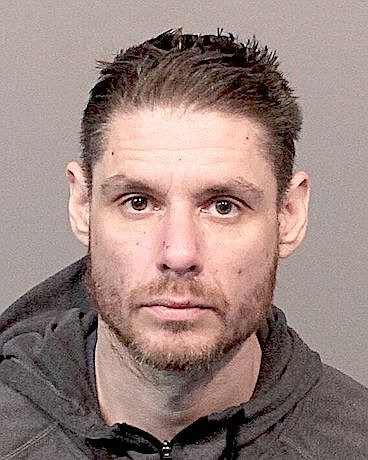 Andrew Cain Kristovich was arrested on Friday within in sight of the Stewart Conservation Camp.

A federal escapee, who is accused of choking and raping a woman who helped him, was taken into custody within sight of the Stewart Conservation Camp in Carson City.

Andrew Cain Kristovich, 38, is being held at the Washoe County Jail after Carson City and Douglas County Special Weapons and Tactics deputies swarmed a home on Schultz Drive near the county line.

According to the U.S. Marshals Service, Kristovich escaped from a federal prison by slipping through the fence on April 25, where he was picked up by an ex-girlfriend.

Not long after his escape, he assaulted the woman and fled in her vehicle in Clark County, Wash., where he faces a warrant on charges of rape, domestic violence, robbery, unlawful imprisonment and auto theft.

During the search federal investigators found the stolen car I Edmonds, Wash.

He was tracked to Carson City where members of the task force conducted 48 hours confirming he was hiding out in a tent on the property.

Marshals alerted the Carson City Sheriff’s Office that Kristovich was armed and intent on fighting arrest.

Furlong deployed SWAT teams from both Carson City and Douglas County at around 11:30 a.m. Friday to search for Kristovich.

“During preparations to move the SWAT teams into the area, continued intelligence efforts revealed that small children were likely on the property and would present the teams with additional challenges,” Furlong said. “The team leaderships were advised and quickly adjusted their deployment plans.”

After notifying neighbors of the home in the 7109 block of Schultz Drive to shelter in place, 35-40 deputies and marshals surrounded the home and spotted Kristovich in a field.

He was taken into custody without incident or injury.

An AR-15 rifle was found where Kristovich was first spotted.

Furlong credited interagency support and cooperation between the agencies.

“The accuracy of the original information presented to the Carson City Sheriff’s Office by marshals, as well as the agency support between Carson City and Douglas County Sheriff’s provided the foundation for the best possible outcome,” Furlong said.

According to news accounts, Kristovich was serving six years on two federal drug charges from a 2018 bust that resulted in 29 arrests in Washington.