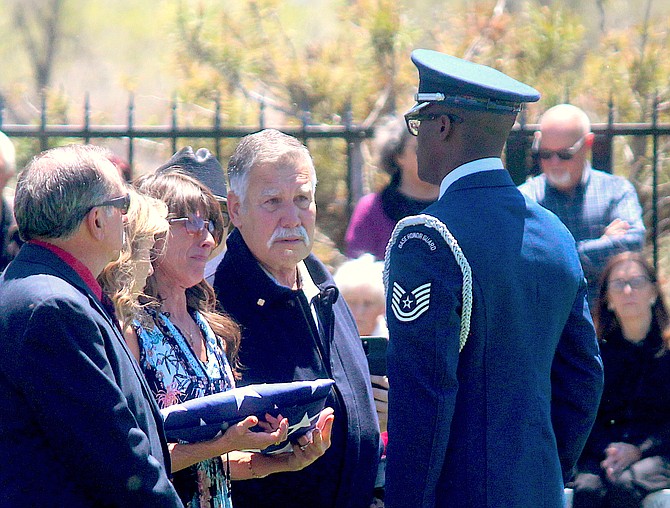 A member of a U.S. Air Force Honor Guard presents the flag from Fallon Montanucci's coffin to her parents on Friday.
Photo by Kurt Hildebrand.

The former Sheriff’s Explorer was home on leave from her station at Malmstrom Air Force Base in Montana, where she guarded Intercontinental Ballistic Missiles.

“She was an incredibly valued member of our unit as you can see by the row of blue up front,” Master Sgt. William Tucker said at her service. “Everyone chose to be here for her. The world’s most dangerous weapons are there, and her job was to protect them. In her short Air Force career, she pushed others and herself to be the best at her job.”

St. Gall Father William Nadeau said he baptized Fallon where she was given an Indian name meaning floating cloud.

“Her spirituality allowed her to live very lightheartedly,” Nadeau said. “She accepted authority, but also listened to her inner voice.”

Nadeau said he makes the sign of the cross whenever he passes the spot on Highway 395, about a half mile north of Airport Road, where there are still signs of the April 23 collision that claimed her life.

“Every time I drive on Highway 395, and I see the spill on the side of the road, I make the sign of the cross and I will continue to that,” he said. “Make some gesture or bring to mind a wonderful memory you have of Fallon and Fallon’s family.”

Montanucci was buried with full military honors at Eastside Memorial Cemetery after a procession through downtown escorted her from St. Gall.

“Fly free Fallon, like a feather in a floating cloud,” Nadeau said.

The service included a three-volley salute and an Air Force honor guard.

Members of the Douglas County Sheriff’s Explorers, where Montanucci was introduced to law enforcement, attended both the service at St. Gall and Eastside.

Montanucci was killed 4 a.m. April 23 when the Hyundai sedan she was driving was struck head-on by a wrong-way F-150 Ford pickup loaded with concrete supplies.

On Saturday, the Knights of Columbus will host a spaghetti feed to benefit the Montanucci family 4-7 p.m. at the St. Gall Pastoral Center.

Tickets are $15 or $40 for a family of four or more. A donation box will be available. All proceeds will go to the Montanucci Family. Tickets are available after all masses and at the door on the day of the benefit.

Donations can be made in Fallon’s memory to any local veteran’s organization or the Douglas County Animal Shelter, according to her obituary.

An account has been set up in the name of the Montanucci Sisters at El Dorado Savings Bank, 1517 Highway 395, Gardnerville. Donors may contribute at any branch.