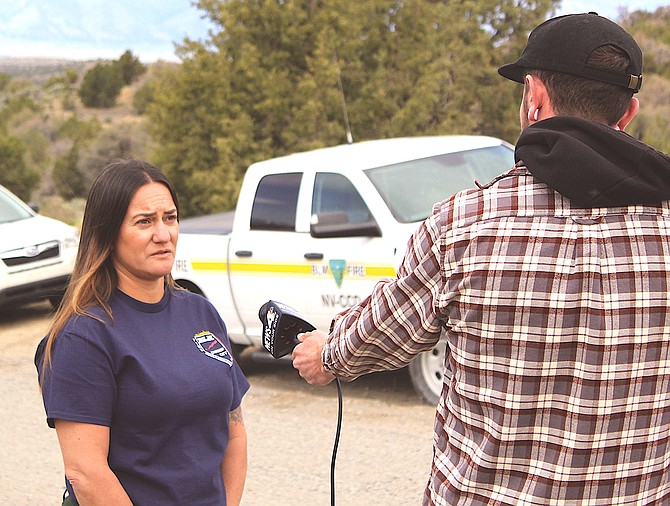 A faulty catalytic converter sent 1,000-degree molten particles up to 70 feet off the road to set the 2020 Numbers Fire.

On Thursday, Bureau of Land Management Fire Prevention Specialist Jennifer Diamond offered a look at the efforts made to reduce fuels in the Pine Nuts before and after the blaze that claimed a half-dozen homes in upper Fish Springs.

“At first, we didn’t know with the Numbers Fire because there were multiple ignitions along the roadside,” she said. “There were 12 different ignitions.”

At the time there was speculation there might have been arson, and Diamond said investigators wondered, as well.

“It was actually hot molten carbon particles,” she said. “We found some of the particles 70 feet from the road, which blew my mind.”

She said the carbon particles can reach temperatures of 1,000 degrees. A bullet fragment can hit 1,400 degrees, which is plenty hot enough to ignite cheat grass, which will burn at 400-600 degrees depending on conditions.

Diamond suggested motorists keep a fire extinguisher in their vehicle and maybe look into their rear-view mirrors occasionally.

On Thursday, she did the same with the Numbers Fire while talking to journalists next to Pine Nut Road No. 2 in the Pine Nuts.

While the Tamarack and Caldor fires dominated the news last year, the Numbers Fire was a prelude of what could happen in a wildfire on the west slope of the Pine Nut Mountains.

While the Tamarack Fire was much larger, overall, and claimed about twice the number of homes, it burned fewer acres in Douglas County than the Numbers Fire at 14,873 acres. The Caldor Fire never burned a single tree in Douglas County, though its impact on the Lake Tahoe Basin and the central Sierra was significant.

Diamond was one of the investigators working the Numbers Fire, which started the evening of July 6, 2020, near Highway 395 above Pineview Estates.

By the time the Numbers Fire was extinguished a week later, it had claimed 18,340 acres and a half-dozen homes.

On Thursday, Diamond stressed that each fire year is different, but that the trend is for fires to burn longer.

“I think every fire year is a little different because of the fuels,” she said. “The fires we’ve seen in the last couple of years aren’t things I’ve seen in my career. On the Dixie Fire, we were losing homes 3-5 weeks after it started.”

The hill above Pine Nut Road No. 2 showed some of the benefits and effects of clearing brush before the fire.

“This year we’ll see what that looks like based on the grass crop,” she said of the fire danger. “All the green and purple you see will dry out and that will be the fuel for the fire.”

Douglas County is at the northern tip of a patch of high fire danger that extends south along the eastern slope of the Sierra into the desert.

While 2022 has been a dry year so far, the water year started Oct. 1, 2021, which saw wet months in October and December, which puts the Carson River Basin at 101 percent for the year.

An extremely dry first quarter of the year left the snowpack, which is the main source of irrigation for the year at 36 percent in the basin, well below either the Walker or Truckee basins.

According to the National Weather Service, .76 inches of precipitation has fallen in Minden since Jan. 1, far below the average 5 inches for the Douglas County seat.