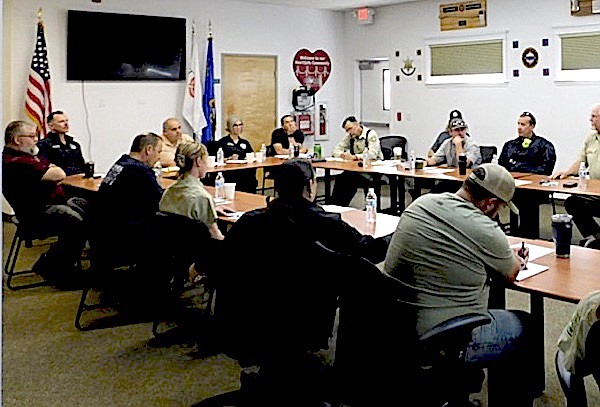 The East Fork Fire Protection District facilitated a May 4 pre-fire season meeting with the representatives from both the Humboldt Toiyabe National Forest and Tahoe Basin Management Unit.

A fire forecast for the upcoming summer and fall indicates the same potential as last year’s big fire season.

The Tamarack Fire burned more than 17,000 acres when it crossed into Nevada and East Fork’s jurisdiction, consuming 10 primary structures, affecting five others, and destroying numerous outbuildings, vehicles, garages, and other personal property.

“Long term fire operations are becoming more and more frequent in our area,” East Fork Chief Tod Carlini said. “Campaign Fires” as they are known, can run as long as a couple of months, such as the Caldor Fire.

Fuels management projects were also a major point of discussion.

While the upcoming operational considerations were central to the discussion, the most important objective was to introduce each agencies incident management and command staffs to each other.

“It makes a big difference when you meet with your federal counterparts in incident management before you are thrown together at an actual incident,” Carlini said. “Most of our wildland fire incidents, if not all, will include federal lands.”

Carlini said there has been a significant number of leadership changes across the region, both at the local and federal levels.

East Fork alone has one new deputy chief, two new battalion chiefs, and at five fire captains with less than two years in the position.  He said he has always valued the relationships he has had with regional partners over his career.

The East Fork Fire Protection District covers 650 square miles which is about 96 percent of Douglas County.  The district has jurisdictional area in the Lake Tahoe Basin as well, which requires working with two different Forest Service management units and personnel.  All were represented in the May 4 meeting.

The meeting with the USFS also covered the specifics of resource deployment, pre-fire attack plans,

use of aircraft and bulldozers, water supplies, evacuations, and post fire actions.  The district and USFS discussed the concepts of full suppression and incident command decision during the initial phase of an incident.  A meeting with the BLM will soon be schedule and the district is coordinating exercises, both table top and in the field.