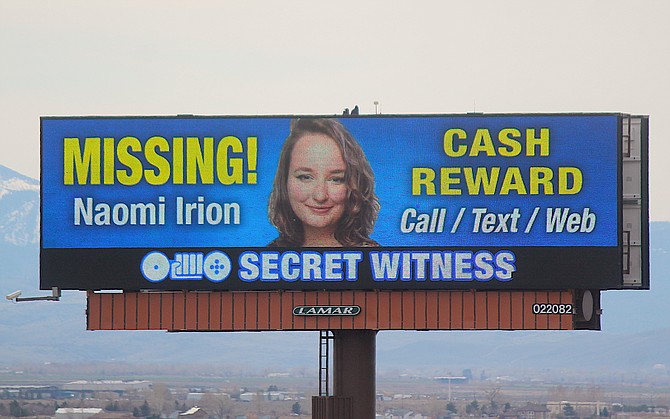 A billboard seeks information about the disappearance of Naomi Irion on Wednesday afternoon. Discovery of the abducted 18-year-old's body was confirmed a few hours later.

The discovery of 18-year-old Naomi Irion’s body on Tuesday was confirmed on Wednesday evening by the Lyon and Churchill county sheriff’s offices.

Investigators from Churchill and Lyon responded to a remote part of Churchill County after receiving a tip on Irion’s disappearance.

They found a gravesite and contacted the Washoe County Sheriff’s Office forensics team to process the scene.

On Wednesday, the Washoe County Medical Examiner confirmed the remains found were those of Irion.

On Wednesday, Fallon resident Troy Driver, 41, appeared virtually in Canal Township Justice Court from where he’s being held in Yerington.

Driver was arrested on March 25 and the truck authorities had been searching for was impounded for evidence.

Prosecutors charged Driver with kidnapping, but the discovery of Irion’s body will certainly result in those charges being amended to include homicide.

Irion was abducted from the Fernley Walmart before dawn on March 12.