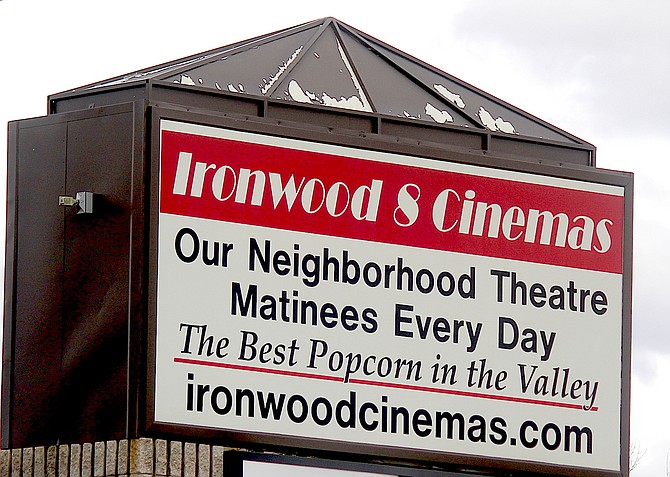 The Ironwood 8 Cinemas in Minden has a new owner.

A new owner is operating the Ironwood 8 Cinemas in Minden after taking possession of the 24-year-old theater earlier this month.

Russ Levinson said he started running the theater around March 11 and that things have been running smoothly with no closures, but that the theater requires some work.

“We’re working on some new seats in some of the theaters,” he said. “We’re just trying to improve things, fix things up. We’ll be improving the concessions and fixing up the projectors, improving the presentation, flooring and carpeting and things like that.”

Levinson comes from New York and is the latest of three generations of theater operators and looks forward to continuing that legacy in the West.

Levinson and a couple of employees are keeping the theater going until business picks up.

“It was in danger of closing forever, that’s for sure,” he said. “For us to stay open, we need more people to come. The people who do come are great, but we need more.”

In order to bring in more people, the theater is hosting birthday parties, group events and other custom uses.

“Those are things this theater hasn’t been traditionally involved in, but it’s something we’ve done back on the East Coast,” Levinson said. “We’re starting up birthday parties. It’s easy for parents and we can show pretty much any movie from something old or something we have playing. We have private theaters we can do that for. We also want to reach out to churches and schools, camps corporate events, charitable and fundraising events.”

He said the Ironwood’s prices are more affordable than those at bigger theaters.

“Minden is not the biggest town in the world,” he said. “We need to get more people in town to come and we also need to attract people from maybe Carson if we can. We have lower prices than some of the bigger theaters. We think the birthday parties, and group events and private showings are a way where we can really stand up.”

Ironwood 8 Cinemas first opened in 1998, but went into bankruptcy in 2011. The next year Jim Sheehan and partners purchased the theater and have operated it for the last decade.