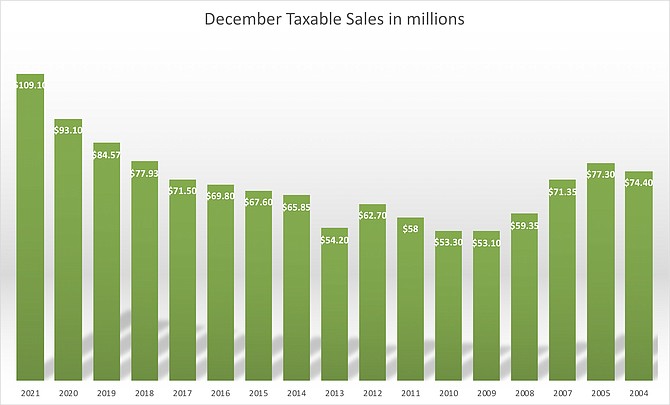 Santa brought snow in December and a healthy dose of cash to Douglas County’s tourist-related sectors.

Douglas merchants brought in $109.1 million during the month up 17.2 percent from the $93.1 million in December 2020, according to the Nevada Department of Taxation.

It was the first time in the 21st Century and perhaps in history that Douglas merchants brought in more than $100 million during a December.

On Monday, the state will meet to decide of Douglas County will lose its guaranteed revenue status. That status has provided the county with a set amount of funding based on its population.

Food services and drinking places were up 13.3 percent o $10.53 million in taxable sales, while related accommodations were up 10.9 percent to $3.6 million and $2 million to amusement, gambling and recreation.

Most shopping appears to have occurred in November as general merchandise stores were just up 5 percent from December 2020, reeling in $14.8 million in taxable sales.

For all the press online sales are getting, the nonstore retail sector was actually down 3.2 percent to $10.7 million, perhaps reflecting the 2020 coronavirus winter surge that kept some shoppers online instead of hitting the stores.

Building material and garden equipment and supplies hit $6.3 million, up 13.1 percent over December 2020, and possibly also a reflection of the reticence for shoppers to hit the home stores.

Merchant wholesalers of durable goods nearly tripled their taxable sales in December, up to $13.4 million compared to $4.59 million in December 2020.