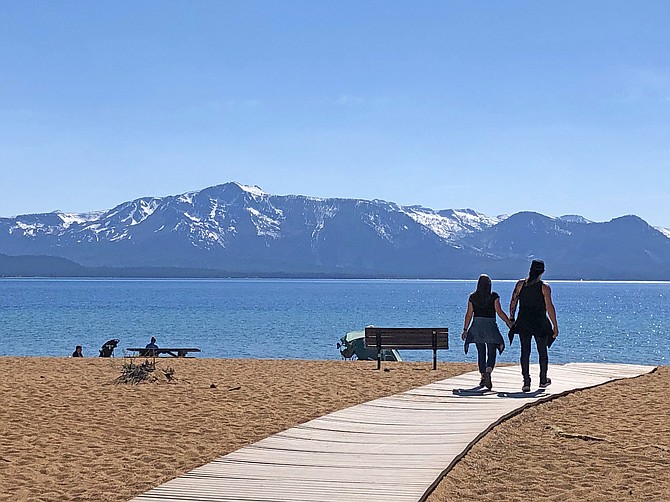 Nevada Beach in May 2021. Photo by Lisa Heron of the U.S. Forest Service

A man who has been contacted for illegally camping at Stateline since 2016 was taken into custody earlier this week after deputies found he’d been setting fires.

The 55-year-old man was found sleeping about 50-75 yards off the Lam Watah Nature Trail above Nevada Beach.

Deputies reported that on either side of his sleeping bags were areas where he’d burned his trash on a bed of pine needles. Also found were pieces of burned paper around 10 yards away.

He didn’t have any water or tools to extinguish a fire.

According to the report, the U.S. Forest Service had issued trespass warning to the man.

Due to his history and the multiple warnings he’d received over the years, the man was taken into custody. He is scheduled to appear in Tahoe Township Justice Court on July 5.

The arrest was part of the annual preparations conducted around Lake Tahoe for the big Fourth of July weekend.

Due to the volume of visitors within the Stateline casino core, Nevada Beach, and Zephyr Cove areas throughout the weekend, the Douglas County Sheriff’s Office is reminding residents and visitors to be safe and mindful of the laws surrounding their festivities.

“The goal of the Sheriff’s Office is to protect life and property while at the same time allowing celebrants to enthusiastically celebrate the July 4th holiday,” officials said. “DCSO emphasizes safety first when enjoying the holiday weekend. There are behaviors that will not be tolerated by law enforcement.”

Anyone planning to be at Nevada Beach for the Fourth of July is reminded that any open container of alcohol is prohibited.

“Throughout the Stateline casino core area, Zephyr Cove and Nevada Beach, the Douglas County Sheriff’s Office and Nevada Highway Patrol will have increased patrol personnel on duty as well as in both the Carson Valley to handle calls for service and traffic enforcement, particularly targeting speeding and intoxicated drivers,” according to the county.

catch a ride with a sober driver or use a local driving service.

“This Fourth of July, commit to only driving 100 percent sober,” officials said. “Don’t lose your independence on Independence Day, and don’t be a deadly risk to yourself and other innocent people.”