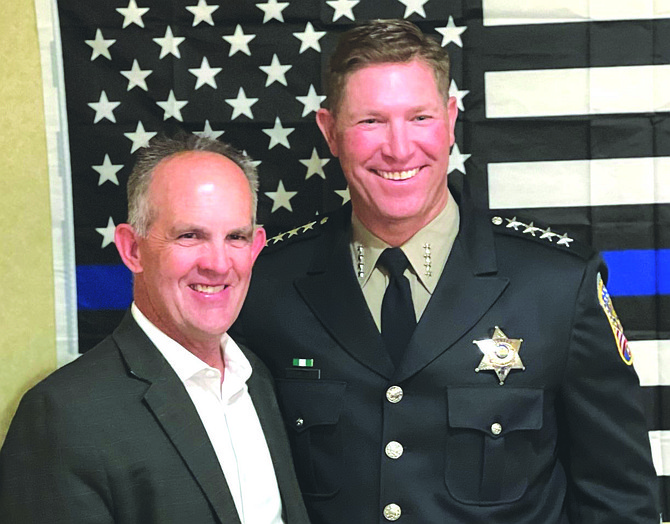 The Tahoe-Douglas Elks have been busy with a number of honorary events and celebrations over the past several weeks.

In May, Lodge No. 2670 hosted a Law & Order dinner for the Douglas County Sheriff’s Office, with Lyon County Sheriff Frank Hunewill serving as guest speaker.

“DHS has created an innovative environment for you to succeed in your future,” Haug said in his presentation remarks. “You are responsible to take these opportunities and transform them into meaningful experiences for yourselves.”

Haug and past Lodge president Tom Zogorski, who is coordinator for veterans affairs and Meneley Elementary activities, presented the middle school awards on behalf of current President Anne Marie Neacy and all 450 lodge members. Certificates were signed by Neacy and either the Secretary or Activities Committee Chairman of the Benevolent and Protective Order of Elks (BPOE) Grand Lodge in Chicago. Student honorees also received a cash card.

During the ceremonies, Haug said the Elks were “pleased and honored” to recognize the students for their accomplishments, academic strengths, leadership skills, character, and citizenship.

The following CVMS students were recognized as Students of the Month at their eighth-grade promotion ceremony:

Hadley Peck was recognized as CVMS Student of the Year.

The following PWL students were recognized as Students of the Month at their eighth-grade promotion ceremony:

Elissa Dumlao was recognized as PWLMS Student of the Year.

June 14 was Flag Day, and the local Elks celebrated by presenting 8 different US flags that have been flown throughout our nation’s history. Antoinette Casselberry placed the flags at the No. 2670 lodge.

BPOE is the only fraternal organization to require a formal observance of Flag Day. In July 1908, the Elks’ Grand Lodge provided for the annual nationwide observance of Flag Day on the 14 of June each year, making it mandatory for each subordinate Lodge in the Order. President Woodrow Wilson officially established June 14 as Flag Day by proclamation in 1916, and it became a national observance in 1949 after President Harry Truman, who was also an Elk, was inspired through his lodge in Independence, Mo., to sign an act of Congress dedicating June 14 to this symbol of the United States (elks.org).

On June 19, local Elks officers hosted a Father’s Day ceremony and brunch at the lodge. A total of 41 fathers were in attendance, and youngest father, Sky Dwinell, and oldest father, Ken Bryant, each received a gift card.

The Tahoe-Douglas Lodge is located at 1227 Kimmerling Road in the Gardnerville Ranchos, and proceeds from their events benefit programs for seniors, veterans, and youth in the local community. For membership information, visit join.elks.org or call 775-265-4523.