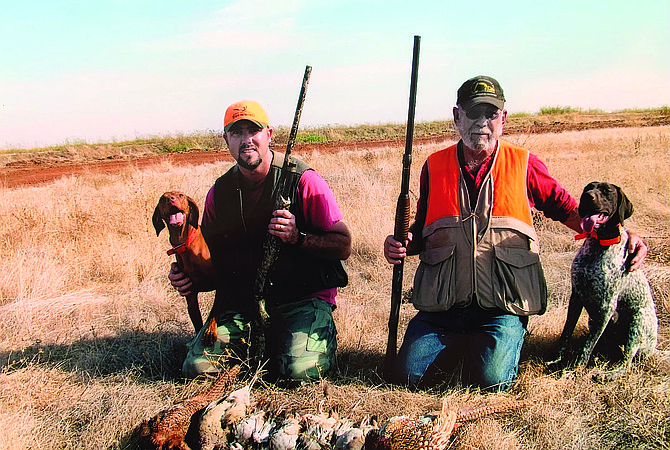 Oldest son George Robert, with Gary and his dog Sierra Rose on one of their hunting trips.
Coyan Family Photo

In the middle of a dark moonless night, Gary Coyan got in his car and drove to a house he didn’t know. Without knocking, he simply opened the door.

He was being led by his gift of “second sight,” passed down to him by his grandmother Margaret. The group of young boys gathered around the wood stove drinking beer included his oldest son, George Robert. He motioned to him to get in the car.

“How did you know I was here?” George Robert asked.

Gary tilted his head slightly and looked at him straight in the eye. It would be one of many occasions that Gary “just knew” his boys were in trouble and would head out to help.

Once they were coming off Tangle Creek into Peasant Valley, traveling through heavy snow. It was so deep; they did not think they could make it back. They concentrated hard to mentally send a message. Out of nowhere, Gary showed up, chains on all four tires. There wasn’t any way he could have rationally known where they were, since this was long before cell phones.

Whenever they would go out into the wilds, Gary would tell them to “send me a signal,” if they got into any trouble. They would do just that. Gary was always there for them. Just like their father, all four boys have a pioneer spirit, unique in their own right.

The grandson of homesteaders John and Margaret Ellis, Gary was raised in Alpine County, learning the intimacies of this land like the back of his hand. He was a hunter, trapper, fisherman, and could fix anything with whatever was available. He was not a complainer but accepted things as they were, meeting them head-on with all the energy he had.

He absolutely loved being alive, and it was hard for him to leave this earthly realm. He said that if reincarnation existed, he would be at the head of the line to come back. Gary always put his family first: sons George Robert, Adam, Josh, and Gary, Jr. Along with his grandchildren, Allison, Leo, Ellis, Lilah, Andrew, and Theo, these are the individuals that have formed his foundation.

Gary’s grandfather John Ellis came to the U.S. in 1864, working in New York quarries, mining in Virginia City, and finally settling in the boomtown of Silver Mountain City (slightly off what is now Highway 4) in Alpine. He ran the Fisk Hotel there, and homesteaded in Diamond Valley, just south of Snowshoe Thompson’s land.

John brought his bride Margaret over from their homeland of Wales, and they had three children. Margaret had the gift of premonition, and sadly foretold her own death in childbirth. John sold the Diamond Valley homestead after Margaret passed and purchased the Alpine Hotel in downtown Markleeville. He knew it would be easier to raise his three children there.

Oddly enough, it was the same building where John originally worked in Silver Mountain City. It had been moved, piece by piece, to Markleeville. Today it houses the Cutthroat Brewing Company.

Gary’s father George Coyan was a caretaker at Blue Lakes along with his other grandfather Wilson Coyan. The two would ski into Markleeville when necessary for supplies. It was there he met the lovely Elizabeth Ellis who worked at her family’s business. George and Wilson would bring down fish and quail to trade for their room and board.

Elizabeth Ellis married George Coyan and they ultimately had four children. The first died of pneumonia at the age of three. Their second was a daughter. Gary was their third, and lived a robust life as an avid outdoorsman until his death this year at age 88. When their daughter died of MS in 1961, Elizabeth and George adopted their grandson, Barry.

Growing up, Gary attended grammar school in Alpine. He started working on local ranches bucking hay when he was only 14 years old, sleeping in the orchard on site so he did not have to travel back and forth. He was a strong, hard worker and found he could get a job anywhere in the valley.

As a hunter and fisherman, Gary felt that, “If you are going to kill it, you are going to eat it.” He did not ever hunt “for sport.” He had deep survival instincts and having been raised not only in the wilderness but also in the Great Depression, he did not waste anything. If he saw a deer killed on the side of the road, he used every part.

After his graduation from Douglas High, he joined the Navy. He fired missiles into Korea seven days a week, becoming saturated with the chemicals inside them. He stood bow-watch on the deck in a hurricane and survived the whole ship going under. Gary had an indomitable spirit.

He opened the Alpine Construction Co. along with Fritz Thornburg. The Markleeville water system had been condemned, and they completely rebuilt it. It was both a daunting and difficult task, along with creating the roads for Markleevillage. They worked for the county all day and continued this strenuous labor after they got off.

Gary did a lot of volunteer work, too.

“If there was a forest fire, everybody ran to help,” he said. “That was the way it was.”

He was also a volunteer county deputy, working for the first woman sheriff in California.

Holding positions variously as county game warden, State sealer of weights and measures, he also worked driving the school bus. He did that along with managing transportation, maintenance, and custodial departments for most of his 31 years with the school district.

When his father George was coroner, Gary worked as deputy coroner. It was a brutally demanding job. He was also a probation officer for around 8 years. He already knew all the kids from driving the school bus. He put together these overlapping careers to make a living in a place where you have to be adaptable, willing to change, and do a lot of different things. A life-long job in the smallest county in California (with the present-day population of two people per square mile) rarely happens.

Gary went on to build a Frosty, with the best soft-serve ice-cream you could ever imagine, in addition to a laundromat right in downtown Markleeville. Today both are private residences.

Gary was intensely loyal and genuinely himself. There was no other person quite like him: he was rough hewn from these granite peaks, did things his own way, and made no apologies.

He was authentic. When he was forced to get care in Gardnerville, he said it was the first time in roughly 150 years a Coyan was not living in Alpine County.

His oral history is available from the Alpine County Museum by calling 530-694-2564.

The website is alpinecountymuseum.org. His memorial will be held 3 p.m. July 2 at Turtle Rock Park, located on the right, just before Markleeville.