Man denies he was driving in fatal wreck 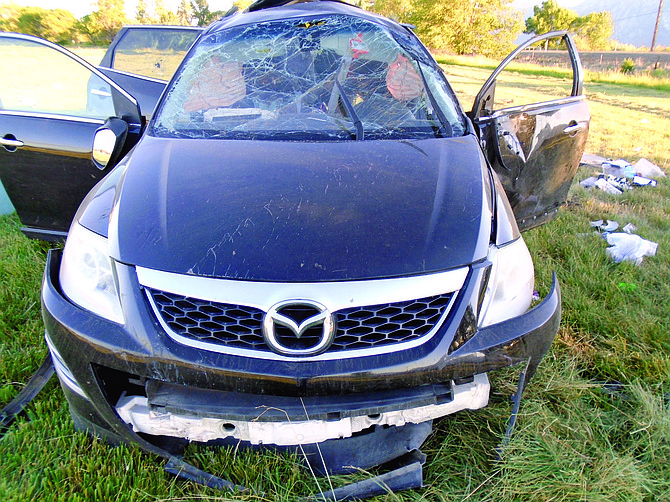 The vehicle involved in a fatal collision near Minden on June 26, 2021. A man facing DUI charges is denying he was the driver.

A California man is denying he was behind the wheel in a fatal collision that occurred June 26, 2021, on Highway 88.

Gregory Charles Bettis Sr., 50, pleaded innocent in Douglas County District Court on Monday to one count of driving under the influence causing death.

A trial is scheduled for April 25, 2023, to arrange for additional forensic DNA testing of the air bags in the 2010 Mazda CX-9 which ran off the road and overturned.

Katelyn Shobert, 34, was unrestrained and was ejected from the vehicle, according to the Nevada Highway Patrol.

Prosecutor Patrick Ferguson said testing will help determine whether Bettis was behind the wheel or a passenger.

He said the Washoe Crime Lab is taking around six months to complete testing, and that the evidence would be available at the first of the year.

“That could open or close some doors based on the results,” he said.

Shobert was also intoxicated, according to court documents.

• A Dayton man was taken into custody after four people were injured in a Saturday night collision near Presbyterian Curve at Lake Tahoe.

The 8 p.m. crash occurred when a white BMW and a Toyota RAV4 collided. The driver of the Toyota was helicoptered to Renown Regional Medical Center with critical injuries. The passenger also went to Renown via ground ambulance.

Llamas was medically cleared and taken into custody.