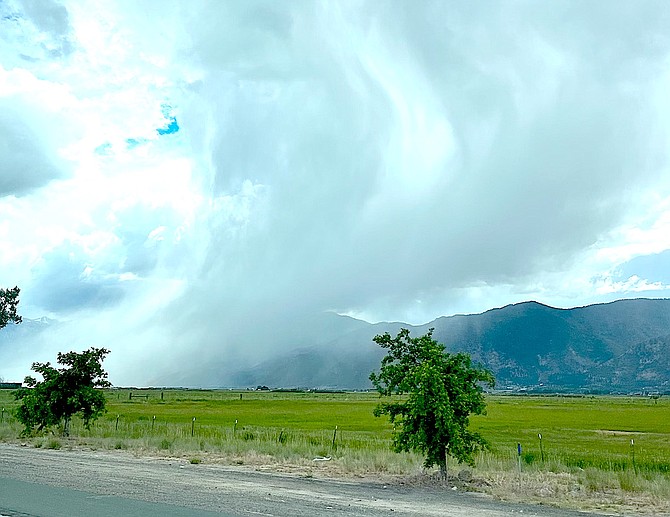 A squall over Kingsbury Grade on Saturday afternoon left a little rain, but not very much in this photo taken by Elaine Shively.

With the addition of 12,634 mailed ballots, the turnout appears to be climbing a little closer to average for a Douglas primary at 41.43 percent.

A couple of races flipped in Douglas that were already decided statewide, including Adam Laxalt with 139 votes over Sam Brown in the U.S. Senate primary and Sheriff Joe Lombardo up by 141 votes over Joey Gilbert for governor.

The south side of a home along Jacks Valley Road was scorched in the Genoa Cemetery Fire on Friday evening. I’m following up on a cause this morning.

Also on my list is a collision at Highway 50 and Zephyr Cove on Saturday night that sent at least two people going to the hospital. One critically injured person was helicoptered to Reno.

There was a little bit of weather on Saturday as rain showers crossed the Valley. That’s all there will be of that for a while, with clear skies forecast over the next week. Today’s high is forecast to be 77 degrees before taking off into the 80s and low 90s later in the week.