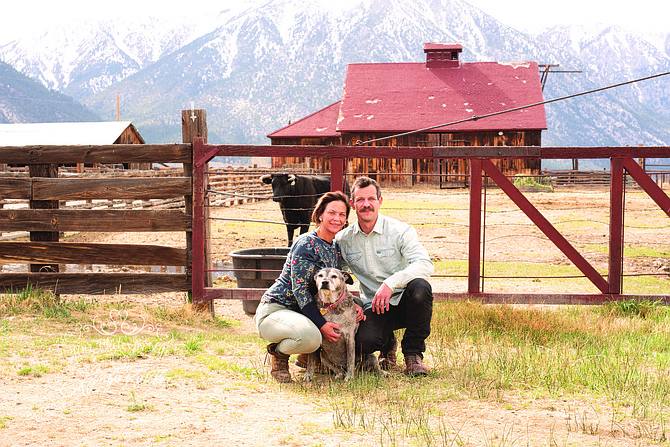 Theresa Orrock, dog Lola, and Tyrel Dressler before their big wedding day on the Dressler Ranch.
Lynne Rueker | Special to The R-C

“He saved my life, as I did his,” said the new bride after their wind-swept wedding on the Dressler Ranch. The world was no longer black & white: their love had opened up a whole new vista of vibrancy, intensity, and color for both of them.

Their solemn vows, shared on April 16, 2022 had been a long time in the coming for Theresa Orrock and Tyrel Dressler. “I had a crush on Tyrel since I was 7 or 8 years old,” reported Theresa, “When we pulled out the old photos you could see I was always trying to be right next to him.”

Their history started long before that though. Theresa’s grandfather Benny DiSalvo and Tyrel’s grandfather Fred Dressler were best friends. Benny came to Smith Valley in 1970 and Theresa’s grandmother Sandra Martin introduced them. She was a good friend of Anna Dressler. Benny’s relatives sold Dressler meat in San Jose. Benny not only bought Fred’s cabin and land in Alpine County’s Charity Valley, he came to live for a time on the Dressler Ranch with his 15 year old daughter Katharine (Kit).

Theresa is Katharine’s daughter. Under the supervision of Tyrel’s mother, Tonja Dressler, and Theresa’s mother Kit, Theresa and Tyrel became very active in a wide variety of the local 4-H programs.

“We both showed livestock. Our families ended up sharing a room at an event in Bishop when we were 11 or 12. Tonja put a big row of pillows between us on the bed,” said Theresa, smiling shyly at her new husband while remembering this fond, long-ago circumstance.

Theresa graduated from Douglas one year after Tyrel, and “hit the road” at age 18, going to live with her father in Sunnyvale. She graduated from Brooks College in Fashion Design. “I love ugly clothes!” she laughs, “and did a line of athletic wear for the World Cup. Fashion is a way of expressing the way I feel and how I want to be in the world.”

She ended up getting a job in an entirely different field at the Los Gatos Community Hospital as a medical assistant in labor and delivery and later kidney dialysis. Theresa went back and forth doing bartending also. All of these positions were good places to use her empathetic skills. She also had “quite an eye-opening” position in booking at the Main Jail in Santa Clara County, living in Scott’s Valley and commuting over the hill.

Called back to Carson Valley so she could be there for her mother 10 years ago, Theresa settled back into what has always been home. Tyrel has encouraged her to re-kindle her artistic talent, and Theresa has been painting and drawing, creating her own business called Bad Art. “I want to let people be themselves through their artwork, to not be afraid of making a mistake, or of having everything perfect. It can be a communication of who you truly are.” Her website is BadArtforSale.com or look under bad.artforsale on instagram.

Tyrel’s mother married John Baptist Borda, whose father was Raymond Baptist Borda, a Golden Glove Champ, and second generation Basque. Tyrel kept the Dressler name and was raised on the ranch with his grandfather Fred. So, both sides of his family represent some of the very first pioneers in Carson Valley.

His grandfather Fred always kept their daily routines fun, but taught him first hand the seriousness of what they were doing. He did not give a lot of “whys,” but rather showed him the way he had learned to handle whatever task was at hand, so Tyrel could learn the value directly.

It is hard work to run a successful ranch, and Tyrel came to love it in a natural way. Rather than leaving right away after their wedding, Tyrel and Theresa stayed to visit with all the people who were special to them. They still went and fed the sheep, and Tyrel was seen out in the fields on his tractor. It is in their blood.

Tyrel has always had a gift for songwriting and playing music. He had his first punk band here in high school, and has continued to play in various groups up until the present. He sets out each day with a song in his mind.

After spending a year at UNR with a concentration in Basque Studies, he moved to Washington State where his daughter Olivia was born. Almost 16 years old now, Olivia is the star and center of his life. Being a father is of the utmost importance to Tyrel.

While attending Evergreen College, Tyrel completed a year long program in Agricultural Grasslands and Grazing. That is why, when his mother had serious health issues arise in 2016, he was prepared to take over as Manager of the Ranch. Tonja and her sister Candyce had been running the ranch together from the time Fred died in 2014, in the very same house where he was born.

Tyrel had a grueling schedule of traveling back and forth between here and Washington. When Tonja passed in 2019 he made the move he knew was coming, and has been at the ranch, heart and soul, ever since. He runs the pastures with his aunt Candyce Wipli, just as his mother had, and he and Theresa run the homestead acreage.

If it was possible to float back in time and look over the magnificent lands of the Dressler homestead, you would find people who were pivotal in forming and defining the emerging community of new settlers here in Carson Valley. They have been introspective, action oriented, dedicated, and treated this special place with deep respect. They have also been willing to accept the back-breaking efforts that are required to keep the great gifts their pioneer ancestors passed down to them.

First generation August Frederick Dressler, a native of Germany, arrived with an ox team in 1860, after having to drink water out of wagon tracks while crossing the 40 mile desert. He chose homesteading over mining after sending for his German bride.

Second generation William F. Dressler, along with wife Margaretta Ann Park, expanded the family holdings to include Mud Lake. Margaretta was descended from an early Mormon family. It was this couple who deeded a parcel of land to the Washoe Tribe, who had watched over this entire geographic area for millennia. It created what is now known as Dresslerville.

Third generation Frederick was the oldest of 7 children born in 1898. His birth was attended by his aunt, the first woman doctor in Douglas County, Eliza Cook. Frederick married Anna Neddenriep, and they had two children, Luetta and Frederick. Anna’s German emigrant parents had homesteaded in Fredericksburg just three miles away.

Together, Theresa and Tyrel radiate an unmatched warmth and love. All the affection and admiration they have for each other spills out over in the space around them.

Whatever the challenges they will face in life, they will meet them together. They have faced deep grief over Tonya’s passing, and the hardship of Tyrel’s recovery after a serious auto accident.

They have already created a rhythm for watching over this land, keeping the pioneer way of life, and honoring those have gone before them. Both can feel all of their grandparents watching over them. This tradition of enduring love has been passed down through the family tree.

Just as a loaf of bread holds the substance of all the wheat that has gone into it, and the character of the field that has grown it, so these two have been kneaded together by, and contain all the harvest of the rich pastures, historic lands, and pioneer peoples of Carson Valley. They are a microcosm of the essence of this place. Moving forward, with couples like them, there is much hope and joy promised ahead.