Work on Stor-All begins in Gardnerville 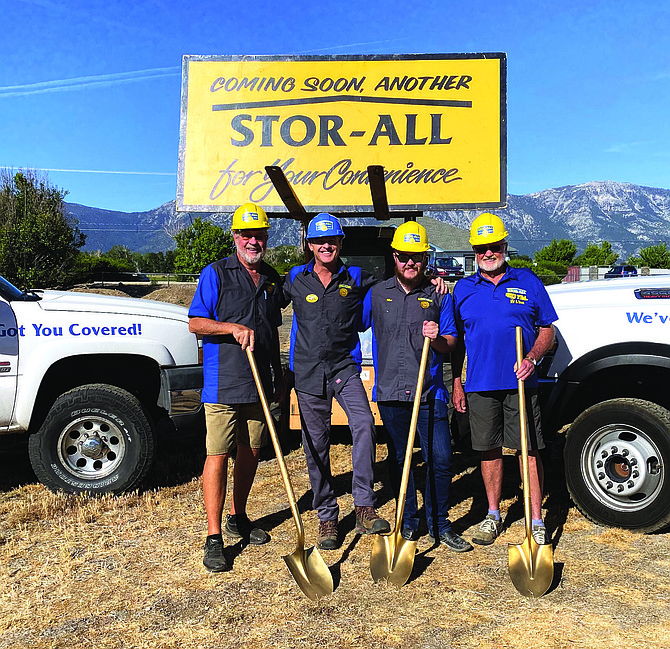 Robert, Todd, Max and Tom Whear pose with shovels at the June 1 groundbreaking for Stor-All’s expansion.

Work has begun on a 35,000-square-foot addition of self-storage space in Gardnerville.

On June 1, Stor-All began work on 1.77 acres of vacant land south of the Industrial Way property, that will include 28,000 square feet of enclosed units and 8,000 square feet of covered space for RV and boat storage, according to Operating Member Todd Whear.

“Over the years, demand for self-storage has skyrocketed in our valley and we have only been able to add new units at the Stor-All facility in the Gardnerville Ranchos.”, Whear said. “This 35,000 square foot expansion was a long time coming. Folks requiring storage close to town now can expect to find more availability. Now we can begin to chip away at the waitlist, take reservations and serve a much-needed demand.”

For more than 50 years, Stor-All has provided the Carson Valley and Northern Nevada with 24-hour drive-up self-storage options.

The business was founded in 1971 by Robert and Twyila Whear. The fifth final phase of this facility was completed in 1991 and eventually a brand-new office was built in 1996 at the current location at 1456 Industrial Way.

Stor-All purchased the 2 parcels in 2018 as it offered one of the last opportunities to expand in the south Gardnerville industrial complex, Whear said.

In order to develop self-storage on the property, the parcels required a master plan amendment and zone plan amendment to change the zoning from commercial to industrial. It was also necessary to revert the parcel back to acreage. This essentially combined three existing parcels into one which included Stor-All’s existing facility to the north.

A site improvement permit and building permits were just obtained over the last two weeks and excavating is now underway. Construction is expected to last through the summer with the new units available for rent sometime in the fall.