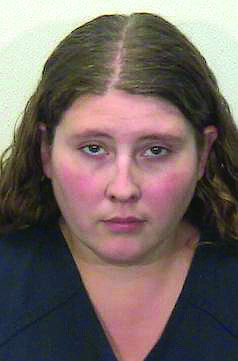 Bryanna Lynn Campbell faces up to 72 months in prison at her Aug. 8 sentencing.

According to prosecutor Chelsea Mazza, the victim was a 3-month-old boy who had injuries and bruises to the face and chest.

There was reportedly a brain bleed and doctors saw the baby with subdural bruises that indicated nonaccidental trauma.

She was arrested May 5.

She has no criminal history prior to this offense. The child is allegedly with the great grandmother.

• A Genoa man, who denied charges and went to trial for eluding Douglas County deputies in a July 2020 pursuit on Jacks Valley Road, which ended in a crash, received a suspended sentence Tuesday.

Wesley Weigand, 35, was convicted of driving recklessly during the pursuit. He was severely injured as a result of a collision with a wall.

Johnson’s statement asked the court to address Wiegand’s mental health and grant probation instead of a prison sentence.

“I have recognized he has a criminal history and driving recklessly and eluding is a dangerous crime, but he has consistently struggled with his mental health and substance abuse too,” said Johnson. “Substance abuse often go and in hand, because people are trying to self-medicate. What I’m asking the court to do is do something different, to take a chance on addressing the mental health as the underlying issue.”

If Wiegand fails the conditions of parole and probation he could be facing the maximum sentence of 28-72 months in prison.

• A man who drove under the influence of alcohol and caused a collision and bodily harm to another driver is going to prison for nine years.

The accident occurred Feb. 13 at Highway 88 and Mottsville. According to court documents, Dadeppo was driving a Black BMW when he failed to stop at a traffic light and crashed with a Honda. The driver of the Honda suffered a fractured shoulder, ribs and vertebrae, according to Prosecutor Patrick Ferguson. Dadeppo was arrested at the scene with a blood alcohol level of .32 and an hour later his alcohol content was at .233,

“DUI’s have been constant in our culture,” said District Judge Todd Young. “We have warned, advertised and punished people like you for decades, but nothing changes. There’s no lesson you have to learn here, because you know better and according to your assessment, you are a high risk to reoffend. This sentence is not to teach you a lesson, it is about protecting the community from you.”

• A professional chef who was charged with assault with a deadly weapon in February, violated the terms of his probation and was sent to 60 months in prison Tuesday.

According to court documents Randy Ray Stine, 43, stole a black Ford Fusion with no intend to bring it back to the owner in April.

He was ordered to 364 days in jail for the misdemeanor offence which will run concurrent to the February case.

In the February case, Stine admitted to a charge in connection with a July 21, 2021 incident with his partner of 10 years. According to court documents an altercation occurred at the Carson Valley Plaza that resulted in deputies responding and taking a statement from a woman whose face was bloodied. Stine managed to evade authorities and picked up the woman to continue the argument as they returned to Sacramento, where another fight resulted in Stine being convicted in September and incarcerated until November 2021 when he was picked up on the Douglas warrant.

• A July 19 trial was sent for a Carson City man accused of three sex felonies involving a child under 14.

Dylan Kenneth Downs is denying charges of sexual assault of a child, lewdness with a child and child abuse by sexual abuse that occurred over two years starting May 2017.

Downs appeared in court on Monday with new attorney Martin Hart who expressed concern that whether he’s ready for the trial will depend on the outcome of a hearing set for June 22.