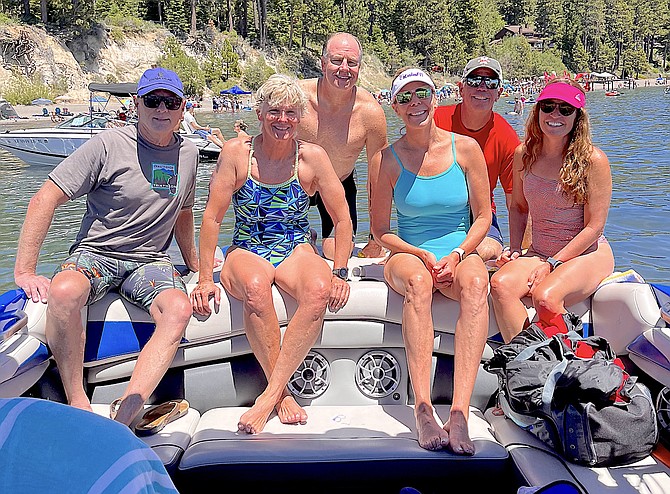 The Carson Valley team takes a picture after completing their relay. The team finished second in the 300-plus mixed division. Photo special to The R-C by Nick Cohee

“This is one of the most epic open water events in the world,” said Race Co-Director Bobby Savulich.

The team of six, Tim Cohee, Val Pate, Karen Sullivan, Kathy Chappell, George Sushkoff and Jeff Miladin competed in the 300-plus mixed division. This means that all their ages had to total over 300 years old. The Carson Valley team ages totaled 344 years old. The team was made up of both members from the Carson Valley as well as members from Virginia.

Trans Tahoe is a 10-mile swim hosted by the San Francisco Olympic Club that is one of the most well-known distance swims in the world. The swimmers take off from Sand Harbor to Skylandia Beach. Each swimmer swims a 30-minute leg followed by 10-minute legs until the finished line is reached.

The team completed their relay in 4:43:42 earning second in their division and 70th out of all 168 teams in all divisions competing.

When Cohee competed four years ago he said the waters were white capped the whole way and that it was so rough that two boats almost sunk at the boat dock. This year’s race was different for his team.

The team trains regularly at the Carson Valley Swim Center in the mornings.

“We spend a lot of time every week at the Carson Valley Swim Center which is such a great facility thanks to the leadership of Shannon Harris as well as our good friends who greet us every morning at 5:30 sharp, Kevin and Richard,” said Cohee. “We also appreciate all the young people who get up so early to have all the lanes ready by 5:30 a.m. All of us who enjoy swimming competitively appreciate what an amazing asset we have with the Carson Valley Swim Center.”

The team trains by swimming around 9-10 miles each week. Cohee said that the primary training comes from swimming sprints.

“If you don’t push it, you’re not going get faster,” said Cohee. “We mostly train by doing sprints. You’re barely getting your breath before the next set comes.”

The race has a registration fee of $850 per team, but a portion of the proceeds go to Keep Tahoe Blue, Skylandia and Sand Harbor Parks Department.

“I’ve been living in this Valley and Lake Tahoe for most of the past 37 years, “said Cohee. “My kids grew up here. We all know what the lake means to the economy. It is an expensive race when you are paying those type of fees. It is awesome to know that a good chunk is going back to Lake Tahoe.”

The relay will be taking place next year on July 15 with registration opening on Jan. 1, 2023.

“We are looking to bring competitiveness, and fun for all who join,” said Savulich.

To find out more about next years relay, email transtahoe@olyclub.com