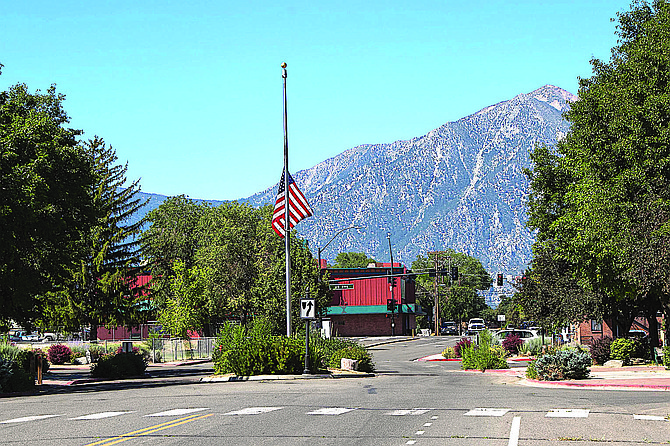 The flag on Gilman Avenue at Heritage Park was at half staff in memory of East Fork Justice of the Peace Cassandra Jones, who also served as chairwoman of the Gardnerville Town Board.
Joyce Meyers | Special to The R-C

Prayers to family of Cassandra Jones

I was stunned and saddened to hear of the death of Justice of the Peace Cassandra Jones.  It was my privilege to have the chance to conduct business with her through her private practice over several years and it soon became clear that she was dedicated, caring, compassionate, kind and true and funny and... well, there aren’t enough positive adjectives to describe the woman I came to know.  One of the things I loved most about working with Cassandra was hearing about the family she adored when we had a few minutes to “just chat”.  Cassandra was wise beyond her years and, while I was sad to lose her as my attorney, I wholeheartedly supported her quest for the Justice of the Peace position because she told me it was her dream.  Cassandra was wise beyond her years and took on every job, whether volunteered or paid, with total commitment and impeccable integrity.  She quietly did pro bono work advocating for children who had been abused in the worst of ways.  So very accomplished in her much too short life, so heartbreaking to think that we will not be able to witness the additional heights to which she surely would have soared.  So blessed that our paths crossed, so very devastated by her passing. Prayers and condolences to all who loved her.

Thanks for supporting veterans

Once again Veterans of Foreign Wars Post 8583 would like to thank the very generous people of Carson Valley for their support of our Memorial Day Buddy Poppy Drive. At our June meeting we were able to vote on our, your, donation recipients which include the Veterans Guest House in Reno, Wounded Warriors, Paralyzed Vets of America, the Ronald McDonald House in Reno, and Tahoe Douglas Elks Veterans Program. The Tahoe Douglas Elks Program is currently supporting a Vietnam veteran whose adult daughter was involved in a playground accident when she was 11 years old (she’s now 35) which resulted in a brain injury. Her treatments are in Minnesota but she is unable to fly because of her injury so driving back and forth is becoming very costly with gas, food and motels.

We would also like to thank Smith’s grocery store and Walmart South for allowing us to set up for the Poppy Drives on Memorial Weekend and Veteran’s Day.

Our meetings are held on the second Thursday of each month at the Elks Lodge located at 1227 Kimmerling Road in Gardnerville. Meet and greet at 6:30 for all veterans then the Post meeting for VFW members and those interested in joining at 7 pm. Look forward to seeing some new members.

Grow or die a fallacy

As the campaign team that helped County Commissioner John Engels get elected almost 4 years ago, a few comments on Markus Zinke’s letter attacking Engels’ service to the community. Zinke was off base on several points, but in particular criticizing Engels’ votes against large residential projects, claiming that Douglas County would have to either grow or die.

We’re aware that many of the RC readership has watched in alarm the hundreds of townhomes being built east of Minden along Buckeye that will generate thousands of additional car trips. This was the last large development approved by the prior Penzel-Walsh-Rice Board of County Commissioners.

Making residential overbuilding a campaign issue allowed Commissioner Engels to garner the slow growth majority needed to defeat then Commissioner Thaler. Too bad we can’t retroactively put those townhomes on the ballot. Highway 395 through town will soon enough become a permanent clogged up nightmare.

Unlike Carson City, with north/south roads that provide a way around 395, Douglas drivers won’t be able to avoid the car choked main drag through town. Southbound drivers will slowly creep to Gardnerville destinations and further south for TRE residents returning home. Douglas drivers who don’t want to put up with the congestion may do their shopping and dining in Carson City.

Commissioner Engels served honorably, first as a captain of artillery in the army, and today in our county with honesty and honor. No one can ever be in perfect agreement with any elected official, but Engels cast every single vote with the best interests of the county’s citizens in mind. We’re proud to have helped Mr. Engels to get elected and wish him well in retirement.

Someone should tell Mr. Zinke that “grow-or-die” is one of those made-up phrases, appropriate for baby zebras but not for communities that already have traffic issues and don’t need the congestion that comes from growth.

I grew up in a Roosevelt era Democrat household. We were a middle-class family who believed that rewards came only after hard work. Growing up in the late 40s and 50s, the country was devoid of hate and violent crime. Today, the country is full of hate and prejudices; the rule of law is almost non-existent, and the news media Is compromised by demands of the progressive left.

The good news is that Democrats are waking up. The Biden Administration’s disastrous America killing policies are about to go off the cliff. Inflation is out of control, our borders are no longer secure, drug use is rampant, the war in Ukraine is a disaster, our schools are mired in social engineering practices, our justice system is the laughingstock of the world, and our military has been weakened by a woke leftist agenda which has China laughing all the way to the finish line. Nevada’s U.S. Senator Catherine Cortez-Masto is the root cause. Now she’s running scared. Cathy can run but she can’t hide from the fact she had every opportunity to vote against the Biden-Schumer anti-America killing policies. She’s a lock-step Democrat politician afraid to speak out against the iron-fisted leadership of her political party. No backbone.

Cortez Masto’s website and TV ads are full of feel-good accolades and claims of half truths or complete BS. Of course, she’s done very little to help Nevadans. She’s at the top step when voting on legislation that hands out free money (our taxpayer money); yet, what has she done to create jobs? Nevada has the second highest unemployment rate in the country and the third highest gas prices in the nation but Masto refuses to stand up for Nevadans while continuing to push a woke agenda. We suffer here in Nevada, while Cortez Masto sits in her ivory tower in Washington, DC, cavorting with all her progressive pals and enjoying the fruits of the rich & famous.

Wake up America. We need leaders in DC that will fight for our state and our country. It’s time for change, and that begins with ousting Catherine Cortez Masto. Return law and order to the USA; stop the out-of-control inflation; put homeless people to work; rethink the rush to green energy that is actually not sustainable; let parents decide what’s good for their own children; strengthen our military and bring world-wide respect back to the United States. Eliminate Cortez Masto – she is the root cause of our country’s woes. Vote Adam Laxalt for U.S. Senate and restore America.