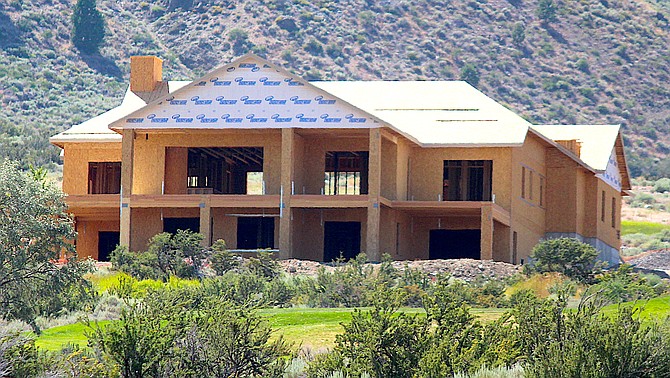 A large home under construction above Jacks Valley Road.

A wildfire that burned a dozen homes in Douglas County prompted a discussion on whether to require sprinklers for homes more than 1,000 feet from a hydrant, but not the one you’d think.

Since then, Gardner said he had a change of heart.

“A month ago, I asked community development to prepare for a possible ordinance repeal and they were prepared to do just that,” Gardner said. “East Fork Fire trustees met and discussed this item and they brought forward some recommended changes for consideration.”

After consulting with Deputy District Attorney Sam Taylor, Gardner said their position should be considered.

The revision of the ordinance governing sprinklers would exempt manufactured houses.

“It does eliminate the need for manufactured houses to have sprinklers,” Community Development Director Tom Dallaire said. “It adds some provisions that in the case of wildfire or natural disaster eliminates the need for a new home built in its place.”

Dallaire said the majority of homes being built in Douglas County are located within 1,000 feet of a fire hydrant

“The purpose of a residential fire sprinkler system is to allow the residents time to escape if there is a fire in the home,” Fire Marshal Amy Ray said. “Normally 97 percent of fires that have residential sprinkler systems are contained to one room. It’s like putting a firefighter in the house.”

“Repealing this ordinance will at some point result in a rural house built to your code experiencing a fire that was much larger than it otherwise would have been,” Mooneyhan said. “We can only hope the residents, neighbors and our members are unhurt in the event.”

“By having this ordinance in place you’re not doing anything to preserve those houses,” he said. “You’re talking about adding $40,000 per house to the cost of that house and making it less affordable at every turn.”

A second reading of the revised ordinance is scheduled for July 20.