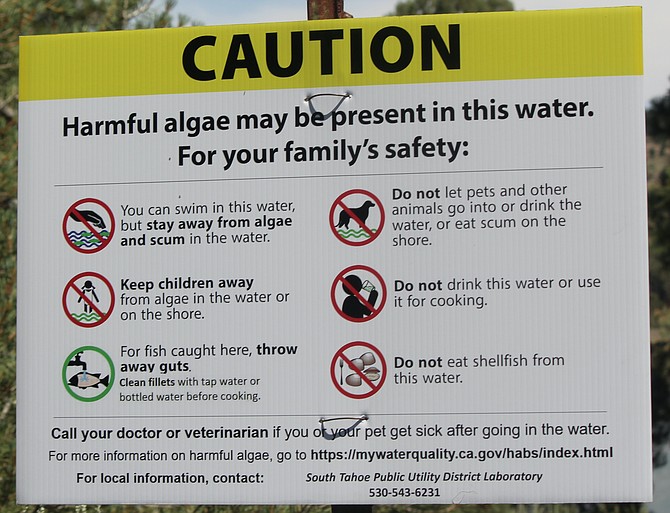 Signs have been posted around Indian Creek Reservoir to warn visitors of toxins produced by blue-green algae.
Photo by Kurt Hildebrand.

One of the collateral consequences of the Tamarack Fire might be an early blue-green algal bloom at Indian Creek Reservoir generating well above dangerous levels of toxins.

Testing detected the toxin microcystin at all three sites sampled at the lake, and the highest concentrations exceeded the danger level, according to the California Resources Control Board.

Alpine County Public Health Officer Richard Johnson warned visitors to avoid touching the water or anything, like a fish, that had been in the water on Thursday.

“My hypothesis is that significant amounts of ash from the Tamarack Fire surrounding the lake have washed into (it) with each rain event this winter and spring creating a nutrient rich environment facilitating growth of the algae.”

Blooms typically occur later in the summer when water warms up.

The algae produce toxins that at best only cause eye irritation, skin rash and mouth ulcers in humans. At worst symptoms include vomiting, diarrhea and liver damage.

Exposures to the toxins can kill a dog or livestock, and can make children extremely ill.

Johnson said testing of Red and Heenan lakes indicated no toxins. Both lakes typically develop issues later in the season.