The Fourth kicks off early at The Chateau at Gardnerville 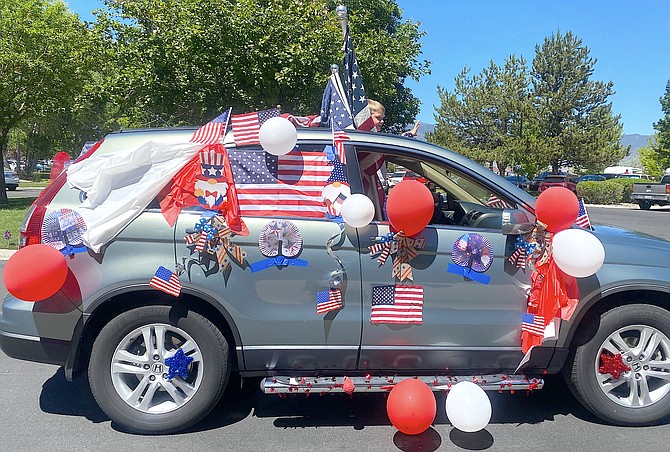 A vehicle decorated in patriotic colors participates in the mini-Fourth of July parade at the Chateau in Gardnerville.
Photo by Haley Estabrook.

Fourth of July festivities kicked off early at The Chateau at Gardnerville as residents and their families celebrated an Independence Day drive-through parade.

Patriotic music was played for the celebration.

“It tugged on my heartstrings,” said resident Lynn Knudsen. “I was listening to the music, and it made me so happy to be an American.”

he Douglas County Sheriff’s Mounted Posse led the procession carrying an American flag and Nevada flag for the attendees to be able to sing “The National Anthem.”

Ten vehicles then proceeded going around a loop twice so that the residents could get a good look at all the cars.

Chateau workers said they were excited to be able to do this for those at the senior living center.

“It is incredible, it is such an honor,” said Community Sales Director Jess Maidlow. “They truly built our country. To be able to celebrate our country with them is beautiful.”

Don and Sally Hoffart drove their 1951 Ford F1 around the loop. They had participated in previous years and said that they are happy it’s back this year for the residents.

“It is always a great thing,” said Don Hoffart. “They perk up.”

Participants to stay after going around the loop could park to create a mini car show for the residents, who wanted to see the cars closer before the festivities concluded.