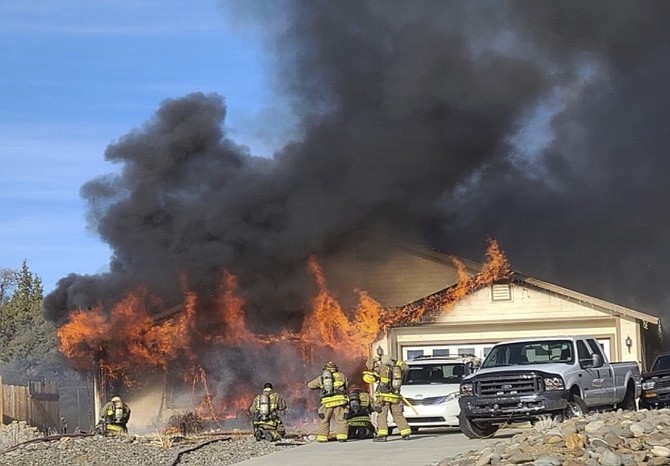 One first responder cut his hand trying to discover if someone was inside a burning Pine View Estates home on Friday.

The fire was discovered by a resident, who came home to find smoke pouring from the house around 2:45 p.m.

When firefighters arrived on Conner Way, flames were visible from the home.

“Initial arriving crews found a single-family residence with heavy fire and smoke showing from the entire front of the structure extending to the attached garage,” said East Fork Battalion Chief Troy Valenzuela on Saturday morning. “The fire was initially a threat to nearby vehicles as well as a residence next to the involved building due to the intensity of the fire.”

Smoke from the fire was visible from Highway 395 and Genoa Lane.

Two-dozen firefighters from four stations across East Fork Fire District responded to the fire, along with logistical support volunteers.

Firefighters reported the fire was knocked down by 3:05 p.m.

“Crews worked for approximately 45 minutes to bring the blaze under control and confine it to the building of origin,” Valenzuela said. “The contents of the structure were a total loss due to fire and smoke damage.”

The cause of the fire was not determined in a preliminary investigation.

The cut was the only human injury reported as a result of the fire and there were no other injuries. A dog that was inside the structure perished in the fire.

The American Red Cross was called to help the home’s occupants.

East Fork Fire wrapped up at the scene at around 6 p.m.

“Please avoid the area as there are still possible structural hazards at the scene,” Valenzuela said.

The cause of a fire that rendered a Pine View Estates home uninhabitable on Friday is under investigation.

The fire was discovered when a resident came home around 2:45 p.m. and found smoke coming from the house on Conner Way.

No one was inside the home at the time. As of 4:05 p.m., rescuers were still looking for a dog that might have been in the house.

Firefighters reported the fire was knocked down by 3:05 p.m.

Smoke from the fire was visible from Highway 395 and Genoa Lane.