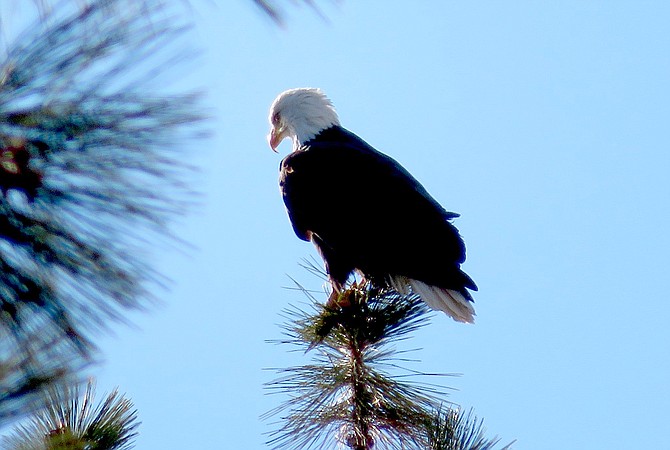 An eagle perches on a tree at Lake Tahoe. Photo by Bob Buehler

Volunteers stationed at 26 points around the Lake Tahoe Basin will be counting bald eagles on Friday morning as the Tahoe Institute for Natural Science celebrates a decade coordinating the Mid-Winter Bald Eagle Survey.

Eagles live at Tahoe year around thanks in part of the large concentration of fish, but they are particularly prevalent during the winter months.

“Bald eagles eat an array of fleshy things including fish, small mammals, roadkill, and in Lake Tahoe especially, waterfowl such as ducks, grebes, and coots,” according to Institute spokeswoman Sarah Hockensmith.

Lake Tahoe doesn’t freeze in the winter due to its size and depth, which means waterfowl congregate where they can find food.

“However, when prey congregate, their predators eventually find them, making Tahoe and the surrounding valleys exceptional locations to watch Bald Eagles in the December, January, and February months,” she said.

It’s not a long flight over the Sierra into Carson Valley where eagles feed on afterbirth and stillborn calves during the winter calving season.

The institute has been coordinating the eagle survey since 2012, after taking over from the U.S. Forest Service’s Lake Tahoe Basin Management Unit.

According to its web site at www.tinsweb.org, this year’s count is full. A virtual bald eagle basics slideshow is 6 p.m. today to discuss how the count works. People can register at the institute’s web site.