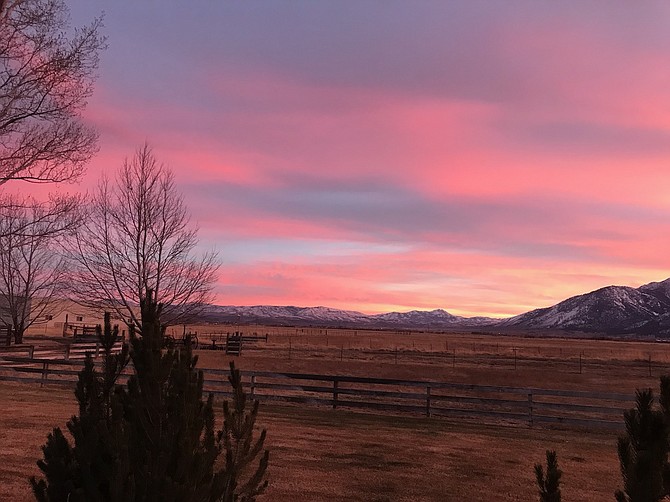 Ursula McManus took this photo of Tuesday's sunset. There's been a lot of color in the sky, but no precipitation.

Genoa, Nev. — Zephyr Cove Elementary is on virtual learning after a staffing shortage due to the coronavirus. The school was closed to in-person learning on Tuesday and will be until after next week’s Martin Luther King Day break. The district has seen an increase in new cases.

Planning commissioners voted not to make any changes to a zoning ordinance on mobile homes as an accessory use in residential agricultural zoning of 5 or 10 acres. The change was sought to aid some of the victims of the Tamarack Fire.

Congratulations to Maureen Casey who was voted the new chairwoman of the Douglas County Planning Commission. The School Board re-appointed Linda Gilkerson to the role.

It took all of 10 seconds for school board trustees to confirm their decision on an election district map. That will go to county commissioners for their confirmation and should be done in time for filing in March.

Just as he was early out of the gate, candidate for governor Dr. Fred Simon got his campaign finance report in on Jan. 4. According to the report, he raised $183,369 and spent $171,662 so far in his campaign. The reports are due on Saturday, so I don’t have much to compare it with. Joey Gilbert’s Oct. 15 report said he raised $201,429.

Today’s weather will look a whole lot like Tuesday’s with cloudy skies to start and then clearing with a high of 56 degrees.