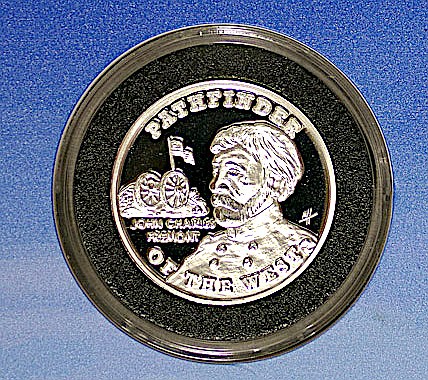 On Jan. 18, 1844, Western explorer John C. Frémont and his party reached the East Fork of the Carson River near where Minden sits today.

On Jan. 8, Historical Coin Press No. 1 at the Nevada State Museum will mint a commemorative medallion honoring Frémont.

Coin Press No. 1 was in operation in the late 19th century at the Carson City Mint.

Today, the old Mint building is incorporated into the museum complex, and it houses the coin press, which mints commemorative medallions from 11 a.m. to 3 p.m. Saturdays.

This month, to honor Frémont’s Jan. 21 birthday, the medallion will feature the American military officer, cartographer and politician. Museum visitors may purchase a half-ounce planchet of .999 fine silver in the museum store and watch as it is minted.

Frémont led multiple expeditions into the American West in the mid-19th century. His 1842-1844 expedition report was used by thousands of emigrants to Oregon and California during the Gold Rush. Geographic features in Nevada that he described and named include Pyramid Lake, the Carson River, the Walker River and Las Vegas.

Frémont founded the California Republican Party and was nominated the national party’s first presidential candidate in 1856 on an anti-slavery platform, losing with 39 percent of the electoral votes to James Buchanan.

President Abraham Lincoln commissioned him major general in the Union Army, and in that position, he issued a controversial emancipation order freeing certain slaves.

In Nevada, Frémont often is remembered for his famous lost cannon, a 12-pound, U.S. Model 1835 Mountain Howitzer, which was abandoned in the West Walker River Canyon in 1844 during an expedition.