Feeding the hungry for a third of a century 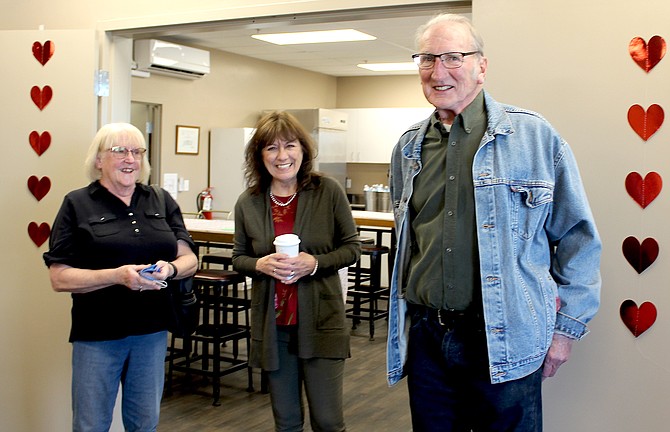 It has been nearly three years since the Carson Valley Community Food Closet opened in its new location and the difference is palpable.

“When our clients came in our other building, we didn’t even have a lobby,” Warehouse Manager Traci Votel said during a recent open house. “There were no restrooms available, no place inside for them to sit down. They had to line up outside year around, so it’s nice that we have a place for them to be able to come in and sit down out of the weather.”

Obtaining victuals from the food closet isn’t that different from shopping. Most of its clients are vetted by social services in Douglas County, leaving the food closet to focus on distribution.

“They take a number and there’s a shopping list,” Votel said. “They can choose what items to take from the list. They don’t just get what they get, they get to chose.”

Votel said that the closet offers several kinds of meat, but lately there has been a lot of fish.

“We get donations seven days a week from grocery stores like Walmart, Costco and Raley’s,” she said. “Anything that’s going to be close to the expiration date, they’ll donate to us.”

While canned goods are available through the food closet, it also keeps fresh produce.

“We purchase fresh from Bonanza produce,” Votel said. “They give us a deal for the pantry so our clients can have fresh vegetables. And the produce is beautiful.”

During the Tamarack and Caldor fires, the food closet helped feed people and pets who had to flee from their homes, since the closet includes dog food donated by the Douglas County Animal Shelter.

Tour participant Lynne Savinski said that when she worked for Microsoft, they would volunteer to sort items at the local food closet.

“It was amazing to me what people would donate that they thought somebody else was going to want,” she said. “There was a lot of diet food. Someone would start a diet and then donate it.”

The Food Closet runs on volunteers and conducts a volunteer training 10:30 a.m. the fourth Tuesday of each month.

“We have orientation monthly for new volunteers,” Votel said. “You will get paired up with a volunteer until you feel comfortable and say ‘I got this.’”

Volunteers assigned a position when they sign up for a day.

Votel stressed that volunteers who sign up for the day are only obligated for that day.

“You don’t have to sign up for every day,” she said.

Founded in 1989, the food closet operates thanks to contributions made by Valley residents, service groups, churches, businesses and local food merchants.