Plus, results from the first ski meet of the season 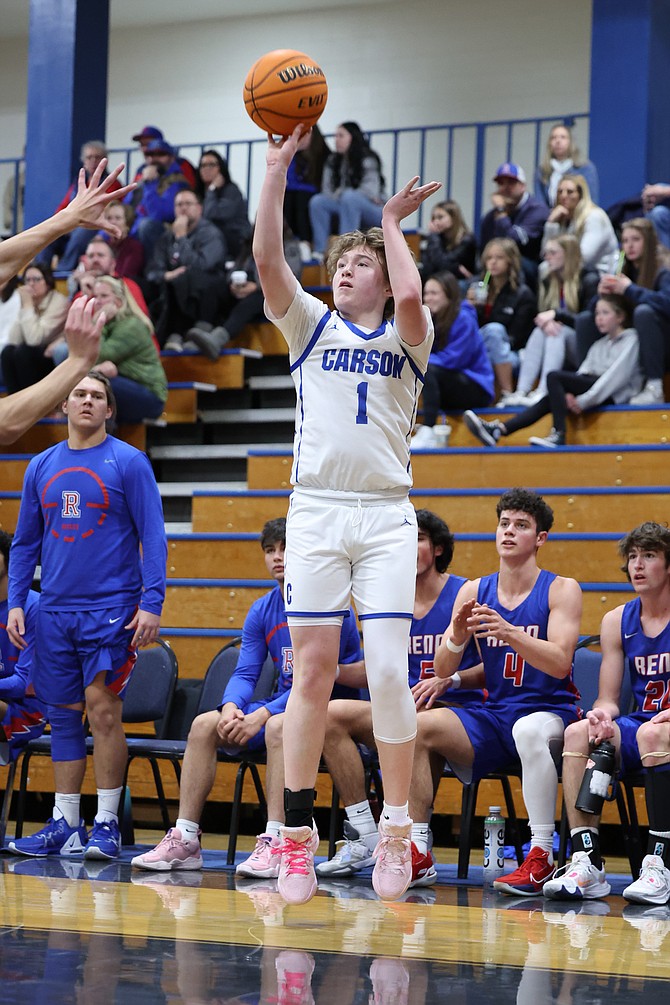 The Carson High boys basketball program led 9-1 Reno High at the end of the first, second and third quarters Saturday.

“They played harder than we did. Coach Golden had them well prepared and they just played harder,” said Ochs. “We’re fortunate to leave with a win. … Decarlo Quintana, he’s a real good player. He’s a really tough matchup. You have to guard him all over the floor.”

Quintana led Carson with 12 points, all of which came in the second half.

Parker Story had eight points for the Senators, scoring six of those in the opening eight minutes.

“I thought Parker Story was a difference in the game early, just his energy, enthusiasm and his great hair. That would’ve been fun to watch, if I wasn’t the opposing coach,” added Ochs.

Senator girls to reschedule against Reno

The Carson High girls basketball game with the Huskies Saturday was postponed, due to illness within the Senator team not leaving enough players to play over the weekend.

Last week, both Carson High and Sierra Lutheran saw their first action of the 2022-23 ski season.

The Falcons of Sierra Lutheran are in their first season under head coach Billy McHenry this winter.

On the girls side, Madalyn Smith had the quickest results of the bunch, putting together a two-run combined time of 1:12.95.

Riley McHenry was the fastest racer for the Falcons, posting a 1:15.18.

For the boys racers, Carson’s Thomas Callister crossed the finish line in 1:15.48.

The Falcons top finish came from Gunni Marr, who was two seconds off the pace of Callister.

On the boys side, Calvin Celio was sixth overall after finishing his two splits in 32.68 and 33.17.

Callen Broadhurst took 17th in a total time of 1:12.33 while fellow Tiger, Brock Vasey, was six-tenths of a second off Broadhurst’s pace.

Keegan Freeman and Colt Cummins were 27th and 28th, respectively, while Edge Torrey was 34th for the Tigers.

Matt Lewis rounded out the Douglas boys finishers, crossing the line in 40th.

Morgan Spohr (36th), Akira Kondo (37th) and Izabella Neely (42nd) were the other three racers to place for the Tigers.