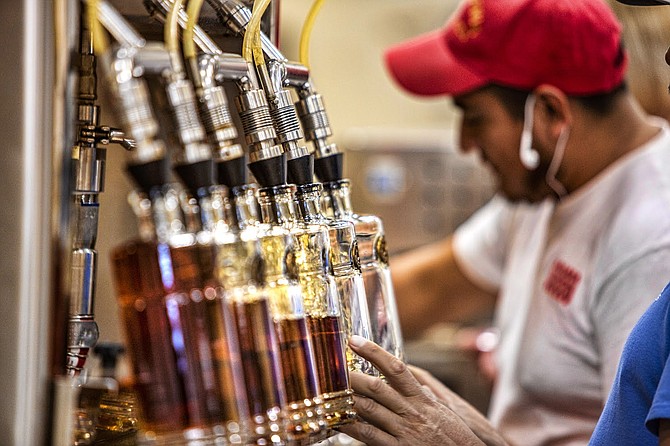 By Kayla Anderson Special to the NNBW

Armed with more than 165 years of family farming history and experience, Frey Ranch Farmers + Distillers is a true leader in its “ground to glass” approach in Northern Nevada agriculture.

It all started with current owner Colby Frey’s great-great-grandfather Charles who homesteaded in Genoa, named Ranch One because it was one of the first original homesteads in Western Nevada back in 1854. He was one of eight people to get deeded in Nevada, living on the land. Great-great-grandpa Charles then moved to Washoe Valley, and married Ethel May Peckham (the same Peckham that Peckham Lane in Reno is named after).

In its next generation, Charles’ son (a.k.a. Colby’s great-grandfather) moved to Fallon in the early 1920s and bought a property called Island Ranch for $60,000, considered a lot of money at the time. Robert Douglas built the house in 1918 and Frederick DeLongchamps was the architect; the home is now a registered historical site. This was the house that Colby’s grandfather was raised in and later Colby’s dad, all the Frey men named Charles.

When Colby’s father ran the ranch, he decided to plant grapes to make wine as grapes are a crop known for conserving water. However, Charlie was getting Napa Valley yield with Lodi prices, and needed to procure more money to justify the expenses.

There are a lot of different variables that affect farming, making growing anything on a large scale and making a living off it hard work. Colby saw all of that, working the farm and driving tractors from a pretty young age, and didn’t deter him from following in the previous Frey’s’ footsteps.

“Ever since I was a little boy, I wanted to be a farmer,” Colby says. “But it’s a tremendous number of hours. You can work your butt off one year and not make anything, and then the next year can be completely different. Farmers always have so many different obstacles to overcome. That’s why 165 years of knowledge is important because the land has talked to us throughout the years.”

Colby was able to take over the farm because his family sold it to him for market value of the business, and he is grateful to have been able to procure the land at a reasonable price. However, when Colby took over the farm, he figured he could already take the grain growing on it and turn it into something he liked: whiskey.

“I thought, I like whiskey better than wine, so why not take those crops and mash, mill, distill them, and convert it into liquor?” Colby realized.

Therefore, using his family’s centuries-worth of knowledge and experience, Colby determined that with the ranch’s specific soil, climate, and irrigation techniques, him and his wife Ashley (who grew up in Gardnerville and he met attending University of Nevada, Reno) could make quality bourbons and ryes within this fifth generation of Frey Ranch.

The ranch was rebranded as a whiskey maker in 2006 when they got a federal license to legally distill the whiskey. However, according to Nevada state law they couldn’t sell it until 2013. That was when they started aging the whiskey – which took 5-8 years – and why no one really heard of Frey Ranch spirits until its first batches were released in 2019.

“Those years between 2006-2013 were a blessing in disguise because it made us slow down, figure out how to grow the grains, mash techniques, and yeast varieties,” Colby explains.

The ranch is 2,000 acres now, and the Freys built a state-of-the-art distillery where they are primed to sell almost 1 million bottles of whiskey in 5-6 years (Frey Ranch is currently bottling/selling 140,000 bottles per year after aging, and every year they increase production).

They grow wheat, rye, barley, and corn for two years then rotate it out with alfalfa which is important for crop rotation and health of the land (alfalfa has deep roots and produces fixed nitrogen, creating a nice circulation of water/drainage system). Five hundred acres of its soil is dedicated to growing grain (corn and rye), and its alfalfa is exported to places as far away as Taiwan and Japan.

“Alfalfa grows really well here; there’s a lot of TDN (Total Digestible Nutrients) in hay,” Colby explains. However, unlike other whiskey makers, their grain never leaves their possession as they use it to make their own ryes and bourbons, opposite of all the alfalfa they send off.

It takes one to one-and-a-half years to plant the fields, then Frey Ranch harvests the grain and puts it into silos, milling, mashing, fermenting, and distilling it,” he says. The process of milling and mashing goes quickly, but then it sits in the barrels for at least half a decade.

Through its California fulfillment center, Frey Ranch can ship its spirits to 30 states, and even sends a pallet to The Whisky Exchange in London. Next year, Frey Ranch will be shipping to Georgia and Arizona.

Colby likes the saying, “If you’re not making dust, you’re eating dust,” and keeps that in the back of his mind as him and Ashley manage the business.

“That’s my favorite quote because you have to get up every morning and keep going. And as a farmer, you’re always out in the dirt.”

When asked about the goals of Frey Ranch, Colby replies, “We want to be the leader in the farm distillery environment. In wineries they grow all their own ingredients but in liquor-making, not so much. I think there’s a big shift today in people caring about their food and where it comes from, and I think it’s the same with distilleries. We’d like to create that movement,” he says.

“The whiskey really has a lot of us in every bottle; we’re one of the only few places that grows and uses 100 percent of our ingredients,” he says.

Frey Ranch is a year-round farm based in Fallon that offers tastings to the public every Saturday from noon-4 p.m. For information about Frey Ranch and how to buy it, visit www.freyranch.com.