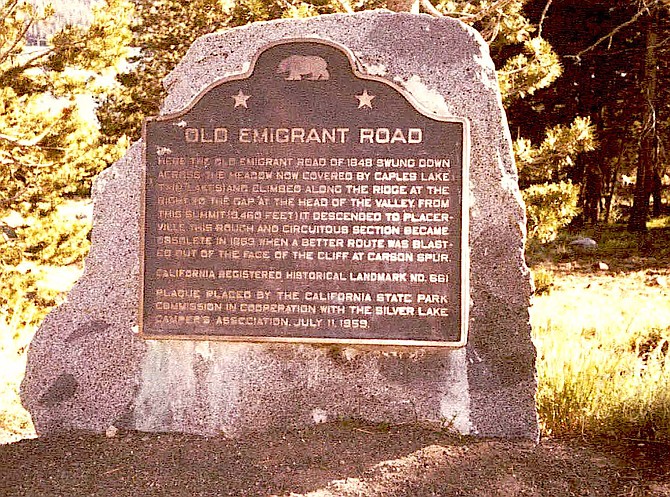 It took almost a year for the facility to evaluate and treat a man who ended up to admitting two counts of misdemeanor possession of stolen property early in November.

Willis Boyd Annis, 49, was extradited to Alpine County to face a charge involving the theft of the historic Emigrant Road sign across from Caples Lake.

At the time of his Sept. 23, 2021, arrest, Annis told deputies there was a chip in his head that allowed them to read his thoughts.

He spent 11 months undergoing a competency evaluation and treatment before he returned to Douglas where he admitted to the possession charges.

It was reasonably clear from the start of the case that Annis required an evaluation, as he claimed in court to be a paralegal who is being subjected to sensory harassment and won a civil rights case in Connecticut. He called the pound of marijuana he found in the vehicle his “holy sacrament.”

Annis was arrested after deputies conducted a traffic stop for an Isuzu Axiom that had been reported stolen also found in the vehicle were two Zebra tablet computers that were pilfered from Walmart.

Willis filed five cases with the U.S. District Court of Nevada within five weeks of being taken into custody in an attempt to be released. None of the cases went anywhere, which was pretty much Annis’ fate as well.

It wasn’t until early November that he was returned to Douglas County from Lakes Crossing where he admitted in East Fork Justice Court to two misdemeanor counts of possession of stolen property for the tablets.

He was sentenced to 180 days on each case, suspended with time served. He agreed to be extradited to California in connection with the sign theft on Nov. 10. He is in custody in El Dorado County jail facing felony theft and vandalism charges.

Meanwhile, a bench warrant was issued for Alyson Mae O’Hara, 47, who admitted to the charge of possession of the Isuzu Axiom she borrowed to buy groceries and then never returned.

In the case of a homeless man who spent three months in custody after being arrested for setting warming fires at Lake Tahoe, he had to be released despite doubts about his competency.

Jerry Lee Murphy, 55, was released on Nov. 1 after being ordered by the court not to possess matches, lighters, or anything that could be used to ignite a blaze.

Attorney Matthew Ence told Tahoe Township Justice of the Peace Richard Glasson that judges across the state are dismissing matters because defendants aren’t receiving evaluations or treatment due to a lack of space in the state’s mental facilities.

Ence asked that Murphy be released, since there isn’t any foreseeable treatment for him.

Murphy was living off the Lam Watah Nature Trail above Nevada Beach, where deputies found trash had been burned on pine needles. He’s already been trespassed off U.S. Forest Service land.

A woman who was arrested in connection with a June 9 shoplifting case ended up getting an evaluation by contract psychologists in order to resolve her case.

Stella Johns is facing a charge of gross misdemeanor battery on a peace officer that occurred during her June 9 arrest. Johns was found to be competent to aid in her defense, but if she’d been required to undergo an evaluation at Lakes Crossing, she’d likely still be there.

Last week, District Judge Tod Young ordered attorneys to submit the names of two doctors to evaluate a person whose attorney said had already been deemed incompetent to aid in her defense.

“Lakes Crossing already has a history of not responding to this court’s orders,” Young said.

The year opened with 90-plus people waiting for a forensic bed at the Sparks psychiatric facility, according to its director.