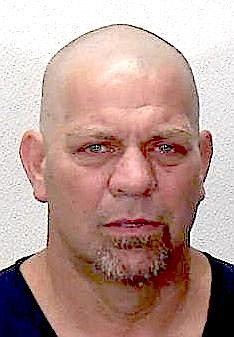 A man, who was arrested after hitting a pedestrian in Stateline, wasn’t drunk, but he also couldn’t pass a sobriety test.

William Earl Peterson, 51, is in custody after hitting a woman, who was walking on the sidewalk off the shoulder of Lake Parkway toward Highway 50 at around 9:43 p.m. Aug. 20.

The woman was helicoptered to Renown Regional Medical Center with injuries to her legs.

Peterson was still behind the wheel of the Chevrolet Colorado that had its right rear tire inside the front passenger window of a Toyota Camry that was parked along the road. The front of the pickup was pinned against a tree facing southeast.

Peterson said he wasn’t injured, and no airbag deployed, according to the deputy. He said he was driving and that he fell asleep while westbound on Lake Parkway and didn’t remember what happened.

A witness said the truck veered left into the opposing lane ran over the hood of the Camry at full speed and into the tree.

Peterson was not able to stand without leaning against something and was swaying when a man came up and yelled at him, he should never drive again.

During a background check, it was learned that Peterson had a felony warrant out of Rohnert Park, Calif. for grand larceny.

Because a crowd had gathered around the scene of the crash, deputies took Peterson to the Stateline substation where he failed a field sobriety test. However, a preliminary breathylizer didn’t indicate he was under the influence of alcohol. Deputies took a blood test, which was booked into evidence.

He told deputies he hadn’t slept for two days and was taking medication for his high blood pressure.

Peterson appeared in Tahoe Township Justice Court on Tuesday. Local charges will wait on the results of the blood test. In the meantime, he’s being held on the fugitive warrant.

Peterson was convicted of home invasion and burglary in 2010, according to Nevada Department of Corrections records.

• A convicted burglar is scheduled to appear in East Fork Justice Court on Wednesday after he allegedly put up his fists on his way out of the Walmart with a vacuum cleaner.

Michael Ashton Roy McPhail, 30, was ringing up $808 in merchandise at the Gardnerville Walmart’s self-checkout that apparently all came up around $1. After store security confronted him, he left the merchandise except for a $329 vacuum. When security tried to stop him, he reportedly put up his dukes and then ran the cart out of the store and put it into a vehicle.

Security reported the theft and deputies spotted McPhail’s vehicle northbound on 395 through town. McPhail made it to Circle Drive before deputies conducted a traffic stop.

In addition to the vacuum, deputies reported finding M-30 pills, a BB gun and several items from Walmarts, including dashcams, flashlights and other items.

McPhail served prison time on two counts of burglary and possession of a controlled substance, according to Department of Corrections records. He was paroled in March 2021.

• A former child actor is in Douglas County jail awaiting transport to Clark County to face a probation violation.

Jessica Habib, 25, was a passenger in a vehicle that was pulled over on Aug. 11 at Highway 395 and Leviathan Mine Road for tailgating.

When asked for her identity she gave her twin sister’s name. She pleaded guilty to misdemeanor obstructing and was given time served.

According to the warrant, Habib was convicted of burglary June 11, 2019, and given probation.