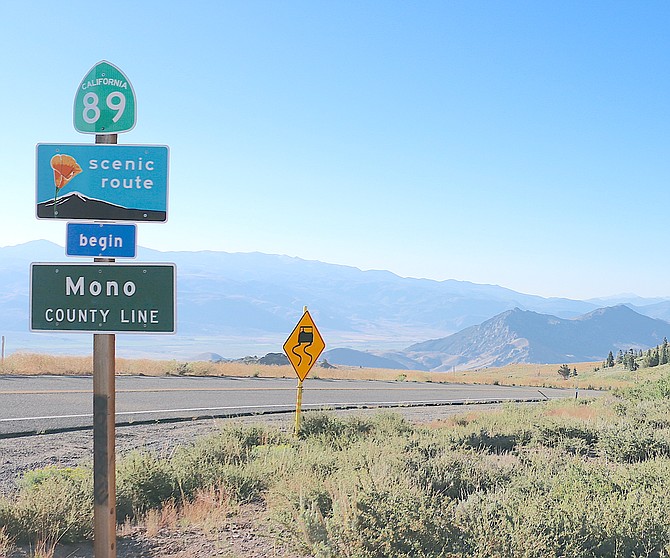 The scenic route indeed, though with the partial reopening of Highway 89 west of Markleeville, no longer the only route.
Photo by Kurt Hildebrand.

Voters in Congressional District 39 have an opportunity this November to choose a representative to the legislature with the background and ability to work for positive change in our community. It takes courage to step up and run for public office, and I am pleased to support candidate Janice Noble.  As someone who has worked with Janice for the last few years, I think she has the skills, talent, creativity and tenacity to face tough issues, solve problems and bring people together. Please check out her website: DrJaniceNoble.com  Janice is a really good candidate with balanced, moderate views. She will study the issues

Test decline due to wokeness

Nationwide, too, I would argue that the growing emphasis on progressive/woke ideologies in schools has hindered the quality and standards of education. Total spending on Social and Emotional Learning all across America grew by almost 45 percent to $765 million between November 2019 and April 2021 – Washington Post – March 28, 2022.

This rapid expansion of SEL nationwide should be a concern for all of us. In 2020, CASEL (Collaborative for Academic, Social, and Emotional Learning) changed the definition of SEL to “transformative” SEL. No longer is SEL primarily used to teach kids empathy toward others, but to train them in the development of “social and emotional competencies needed for civic engagement and social change.”

In other words, CASEL’s aim is to recruit America’s youth as the brownshirt arm of the “woke” political movement aimed at destroying our culture, freedom, and history. And, most troubling, SEL is being used as a resource in Douglas County’s schools.

Parents everywhere, including those in our county, need to be mindful of the values their kids are taught in school. And the rest of us need to get with the program and stop the woke nonsense that is paralyzing the minds of our youth and pushing them into believing that America is systemically racist, and capitalism is evil. They are not being taught that capitalism has brought more people out of poverty than any other known system, while communism and socialism have always left behind death, destruction, broken families, famine, and general hardship.

To thwart the attempt being made to “transform” America into a socialist, globalist nation, we must push back hard – and now. The front lines are our schools, where we must elect school board trustees who will work to raise the quality of education our kids receive in math, science, English, and civics, and understand and resist the danger woke ideology presents to our children and nation. David Burns, Susan Jansen, and Katherine Dickerson will fight to make Douglas County’s schools places of true learning and need our votes for DC school board trustees in November.

This county can now rest easy about its schools. The school board has proposed a policy of teacher neutrality (R-C, Aug. 20, 2022). But wait, what does “teacher neutrality” mean? In the article, Superintendent Keith Lewis provides a definition: “the policy doesn’t prohibit discussing politics or current events in the classroom, it just requires the teacher to be neutral.”

Well, OK then. But let’s get to the key word in Lewis’s definition that also needs a definition, and that word is “politics.” Do the assertions that “all white people have built-in bias against people of color,” or that “all white people have ‘white privilege’” fall into the category of “politics”? If they do, then “teacher neutrality” would compel a teacher to take a neutral position on these concepts.

Or how about “America’s institutions, including its education system, are now and have always been systemically racist?”

In a discussion, a teacher couldn’t reject this Marxist-driven, provably false claim.

What is at stake here, in America’s schools, and in Douglas County’s schools, is truth. I capitalized that word deliberately because I believe that absolute truth exists, and I believe what is taught in our schools should not ignore truth in favor of the Marxist lie that “each individual has his or her own truth,” which currently controls the educational world. That lie, by the way, is what props up “gender fluidity” in case you wondered where it comes from. Teachers would have to be neutral on that, too, which means they couldn’t say it wasn’t scientific.

I hope the people of Douglas County see this move by the current school board, of which two members, Lehmann and Jackson, are candidates on the November ballot, is actually meant to bolster the incumbents’ campaigns. This same board refused to approve or even consider a Resolution supported by the opponents to those incumbents against teachers teaching that any race was superior to another or that any race was systemically racist.

In fact, for several years this very school board insisted new teachers all read “Culturally Responsive Teaching & The Brain” by Zaretta Hammond to prepare for teaching their classes. That book is a guide on how teachers should teach in order to fix the systemic racism that, according to the book’s premise, exists in all of America’s schools.

If teachers at our schools aren’t teaching CRT, it’s certainly not because the current school board didn’t try to train them in CRT.

By the way, in the run up to this coming election, the board “suddenly” decided not to use Hammond’s awful book anymore – coincidence or politics? You choose.