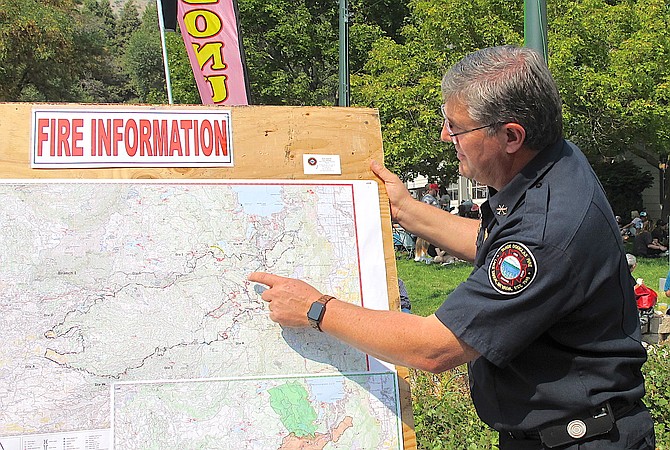 After the devastation of the Tamarack Fire, Carson Valley residents were ready to put disasters behind them only to be pulled up short when the sky turned orange from the Caldor Fire a year ago, today.

While the fire seemed fairly far away, 33 miles as the magpie flies, it was generating an incredible amount of acrid smoke the day after it began on Aug. 14.

By today last year, the drift smoke had cleared sufficiently that the plume was clearly visible rising above Jobs Peak on that Tuesday morning.

By lunchtime, people found ash on their cars and by 5 p.m. the sun glowed orange, an indication that the forest on the west slope of the Sierra was burning and it wasn’t going to stop any time soon.

Aug. 17 also marked the first time NV Energy issued a notice for a potential public safety outage for the Carson Valley, contributing to the sense that the world was teetering on the edge.

The Caldor Fire didn’t slow down, climbing up the American River canyon toward Lake Tahoe, which would see thousands evacuated from their homes two weeks later. While the fire never reached Douglas County, it prompted the first mandatory evacuation in the county’s history.

Caldor was still enough of a threat over the next six weeks, that Tahoe Douglas Fire Marshal Eric Guevin attended Candy Dance with a big map of the fire to explain to people what was going on just over the Carson Range.

So, when people say they’re hoping for a “normal” Candy Dance, we can understand their concern. With thunderstorms brewing with monsoon moisture, we’ve already seen yet a third summer of natural disasters. But the skies will clear, and the trees will turn, and fall will be here soon.