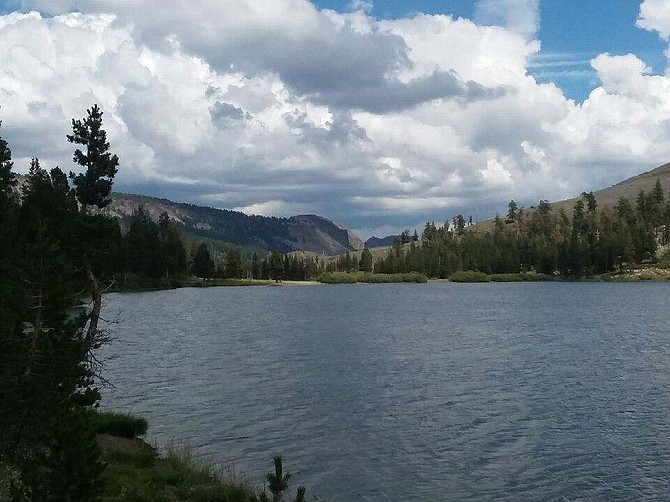 It is that time of year again when we use the “Hoot Owl” method of fishing on our rivers and streams. Due to low waters and excessive heat in many areas, it is recommended to fish only in the early morning or late evenings. This will reduce the stress on the fish during the heating of the day. Which in turn, allows one to properly catch and release fish in a safer manner. Last week, Renee and I took a four-day trip to Alpine County. We set up a base camp at the Carson River Resort. We fished the river the first two days, between the small rainstorms that came in. Unfortunately, the fishing was very slow. I caught a couple small trout on a silver and black Panther Martin, while Renee tried various colors of power eggs and powerbait with only a few hits. We decided to take a trip up to Highland Lakes up over Highway 4. If you have not driven Highway 4, I recommend a very slow speed. When driving west from the Wolf Creek area, the road is extremely twisty and has several blind corners. After you start to climb up to Ebbetts Pass, the first thing you will notice is the center line disappears, and you have a narrower road. Within a few miles you will gain 2,000 feet of elevation. When you reach the top, you will be at 8,730 feet with a grand view on both sides of the mountain. About two miles over the top will be a left turn to Highland Lakes. You can sometimes miss the turn if you’re not paying attention. CalTrans now has it marked with a sign that was put up higher on the roadway. The other sign kept getting hit by the snow plows I guess. Now that you’re on Highland Lakes Road, the road is paved for the first mile and a half, then turns to dirt. Four-wheel drive is not necessary if you take it slow. As you venture in, you will pass a couple small camping areas along a small stream. On this road are eight overflow streams that were dry except for one which only had a splash of water in it. Just enough to get your tires wet. About five miles in, you will come to a ranch, please slow down from 20 mph to 5 when crossing the property. You will also see free-range cows all through the area. Or you can just listen for all the bells that are ringing in the forest. Another mile or so past the ranch you will come up to Lower Highland Lake. The lake is about a quarter-mile long and is sometimes good fishing for small brook trout. Now one thing I did not say in the beginning. When we left The Carson resort, the temperature was in the low 90s. When we reached Highland Lakes, the temperature was in the low 60s. Make sure to bring a sweatshirt if you’re a little sensitive to climate change. There is a small campground area between the lower and upper lake with a permanent structure for bathroom needs. It is a primitive campground, and it is highly recommended to bring some rope to put your food stuff up in a tree overnight. The bear population is abundant in the area at certain times of the year. We had fished for a couple hours when the thunderclouds started to roll in. With the bite being slow to nil, we ventured back out. On one steep downhill area, we came upon a truck with an eight-horse trailer coming up. I backed up the hill and gave him the lead way he needed to proceed. We drove back to our base camp to unwind and venture out to fish the Carson River that evening. Hitting various spots with no luck, we ventured back to camp. The next day, which was a week ago last Wednesday. We decided to take our time packing up to venture back home. We left at about 1:30 p.m., arrived home at 2:30 and unpacked and turned on the news to see that highway 89 north of Markleeville had been closed due to an extreme rain storm that hit the area right after we left. All I could think of is. How many disasters can those poor people of Markleeville endure? First it was COVID, then the Tamarack fire and now a torrential rainstorm. This is a town of small local-owned businesses that survive each year from tourists and local dollars. If you have not been to the tiny town of Markleeville. I encourage everyone as soon as Highway 89 is open. Take a day trip or an overnighter to explore the area. Have lunch at the many sandwich shops and restaurants. Stop in at the Cutthroat Saloon to wet your whistle, check out the general store. While you’re there, stop at the Chamber of Commerce to get all the information on the history of Markleeville. This may sound like a big-small town, But, if you have a good arm, you could throw a baseball from one end to the other. As for your fishing report this week. I’m going to switch it up to a report I received from Scott Champion way down south in the June lakes area.

The state trout stockings during July in all four Loop lakes have improved the fishing tremendously. Even though these fish are a bit smallish, say 6-9 inches, there’s plenty of them. Reminds me of 20-30 years ago when you went out and were pretty much guaranteed of getting your limit of pan size rainbows. There’s still a shot at getting into some bigger fish especially at Silver Lake where the Resort continues to put in bigger Desert Springs Rainbows every few weeks.

Also, the June Lake Loop Trout Stocking Fund is due to plant bigs soon. The afternoon thunderstorms we’re getting this week have cooled things down a bit and a change from hot weather every day does help the fishing. We should get into that warmer summer weather pattern after this week so let’s put to rest the rumor that goes around every summer.......”Don’t waste your time fishing during the middle of the day”....FOOEY! Just fish deeper. We fish all day and catch fish all day doing this.

Weather: The afternoon T-storms mentioned look to be around into the weekend then decreasing in probability. Temps in the afternoons have been dropping to the low 60s and like today it’s 55 at 5 p.m. As the storms became a memory, temps should get back up into the high 70s to mid 80s during the day and mid 50s at night. Real nice for August don’t ya think?

June lake loop: Mostly been fishing Gull Lake so far this season for a couple of reasons. That’s just the way the guide tripping has worked out and since it’s the smallest lake there’s more fish per cubic yard. Just do the math! So here’s the scoop on the loop. After those State stockings we’ve been having 30 to 40 fish days out there.Last trip 13 year old Katharine (pictured) got her first fish ever. Thar ya go, her Sierra Moment! She ended up bringing in 19 slaying her dad who got 12. And that was including an hour and a half lunch break. I’m sure she won’t let him forget it. All floating baits we used were working including Mice Tails, Garlic Pinch Crawlers, Powerbait, and a nightcrawler on a bobber. This seems to be working better the past two years and is a personal favorite especially with kids onboard since they enjoy watching that bobber go down. Hey, who doesn’t, including myself.

June Lake: June is fishing just about as well as Gull for similar size fish with the same baits. For me the most consistent part of the lake is the south end and is usually a good place to be if the wind kicks up.

Silver Lake: Since I haven’t fished it since early June it’s best to check out Andrew’s report on the Silver Lake Resort website. Here’s a local’s tip.....The Cafe there has the best breakfast in the entire region! The sausage gravy is outta this world! For lunch try that French Dip. Sometimes a bit of a wait but worth it.

Grant Lake: We don’t fish Grant much unless it’s full and this year it’s quite low which means higher water temps. Most of what I hear comes from Dan of Dan’s Guide Service and for him the fishing has slowed the last few weeks. That may change due to the recent weather and a state stocking for the first time this year last week.

Rush Creek: According to the CDFW website no fish have been put in this year. Because of that and over fishing for what may be there I’d avoid Rush Creek. If you’re itching to give it a go try throwing lures like a Thomas Buoyant red and gold or Panther Martins black, yellow dot or yellow, red dot. Keep moving and cover a lot of water trying to draw what, if anything is there out from the undercuts or overhanging willows.

Upper Owens River: Mainly fishing the Longears area and it has improved a bit versus a few weeks ago but still not what it has been this time of year compared to two or three years ago primarily because of lower water levels. The flow has been at about 50cfs since late April and I’m used to seeing it at 70 to 80. That being said we have been getting a decent amount of fish up to 12” each trip out and there’s definitely more but smaller fish lately. Seems like more Browns above the corrals with more Rainbows below. Keeping things simple as always the best bet has been fishing an EC Caddis downstream like a wet fly and covering up to a mile of water. Have not seen but a handful of grasshoppers each day when in past years you’d kick up hundreds while walking through the grass this time of year. Little worrisome as it may be a slow hopper season with few big fish moving up from Lake Crowley. Nevertheless, have been having some success chucking terrestrials like Amazon Ants, Chernobyl Ants, and a stonefly pattern named Trina’s Dog Puke. Had to try some just because of the name and it turns out nabbed one of my biggest Browns ever a couple years ago on one. We’ll see how things unfold there as Fall approaches and whether or not LADWP increases the flow.

Backcountry day hike lakes: My two go-to locations, Mine Creek in Tioga Pass and Upper Rock Creek in Little Lakes Valley were fishing great until getting shut out of these spots by the thunderstorms. No fun getting up there and having to dodge lightning bolts or being pelted by dime sized hail so I’ll wait till it calms down. Up until then it had been 20 to 40 fish days of mostly small but a whole lotta fun Brookies. Best flies like usual are Caddis Flies and Black Ants. The backcountry go-to for fly fishing along with small lures and a fly and bubble set up with your spin rig. Good luck on your next fishing adventure. I hope to see you on the waters. If you get a picture of your catch. Send it to sports@recordcourier.com. Good fishin’ and tight lines.