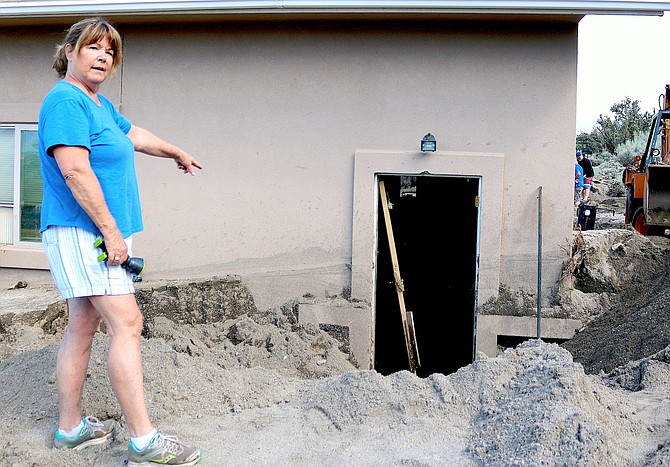 Foothill resident Casey Braun points to where the side door of her home was blown out by 5-6 feet of sand and boulders that washed down into her home.

Having 5-6 feet of decomposed granite wash into the back of their home above Foothill Road on Thursday was only the first shock for Horsethief Circle residents Casey and Larry Braun.

The second shock came when they found out they weren’t insured for the mudslide.

“We’re going to have to do a Gofundme, which kills me to even think about,” Casey said. “That whole mountain behind us came down from a long way up.”

Braun said when Wednesday’s downpour struck everything got wet but there wasn’t much runoff.

About a mile and a half from the Braun’s Horsethief Circle home, Fredericksburg resident Jeff Garvin recorded .78 inches of rain on the same day that Markleeville got around 2.5 inches.

“It was beautiful,” she said. “We thought, ‘oh this is wonderful, just a little bit of rain.’”

The real deluge on Thursday occurred while Braun was at work.

“My husband called me and said, ‘it’s dumping again,’” sending her a picture of a trickle of water running from the canyon. “Next thing you know, it started going through the roll-up door to the shop. All of a sudden, it was getting very serious.”

Larry Braun ran into the house and closed the door to the shop and put towels at the bottom in the hope it would stop the water from getting into the house.

“While he was doing that, he heard a big boom and the two bottom panels of the roll-up door were blown in. We pulled boulders out of there.”

Garvin reported 3.19 inches total rain at his home, and said it was falling at more than 2 inches an hour around 3 p.m. Thursday.

“All I was thinking was, ‘Oh my God, get the dog and the cat,’ and get out of there,” she said. “I kept thinking of the Washoe slide. I told him I was on my way home, and he said you can’t get up here.”

Silt and rock flooded the shop and broke through the side door. Braun said they only had about 2 feet at the top to squeeze into the shop to check the damage.

The home has been red tagged as unsafe and there’s a deep chasm down the driveway.

The couple’s fifth-wheel is buried, as is most of their landscaping.

“We’re walking on top of our trees,” she said.

On Saturday, neighbor Richard Perkins was running a front-loader digging out the back of the home.

The couple has lived in the home for 18 years, and this is the first time they’ve seen anything like this.

“We have one of the most beautiful views in the Valley,” she said.

“We thought of retiring and possibly selling and then we were sitting here and said ‘no.’”

A glass artist who specializes in Tahoe scenes, Larry is 78 years old, and Casey is 69. She works for a landscape company which said they’ll send her some help.

Because the mudslide is considered flooding, the only insurance that would have helped is provided by FEMA. That’s something Johnson Lane residents found out in 2014 when heavy rain fell onto Hot Springs Mountain sending dirt and debris into their homes.

“We’ve got good friends to stay with and they’re right here,” Casey said on Saturday “We’re a ways out from living here, again. I’ll just be happy to be able to live in my living room again.”

An account for Larry and Casey Braun has been set up at Braun fundraiser and there will be local fundraisers as well.