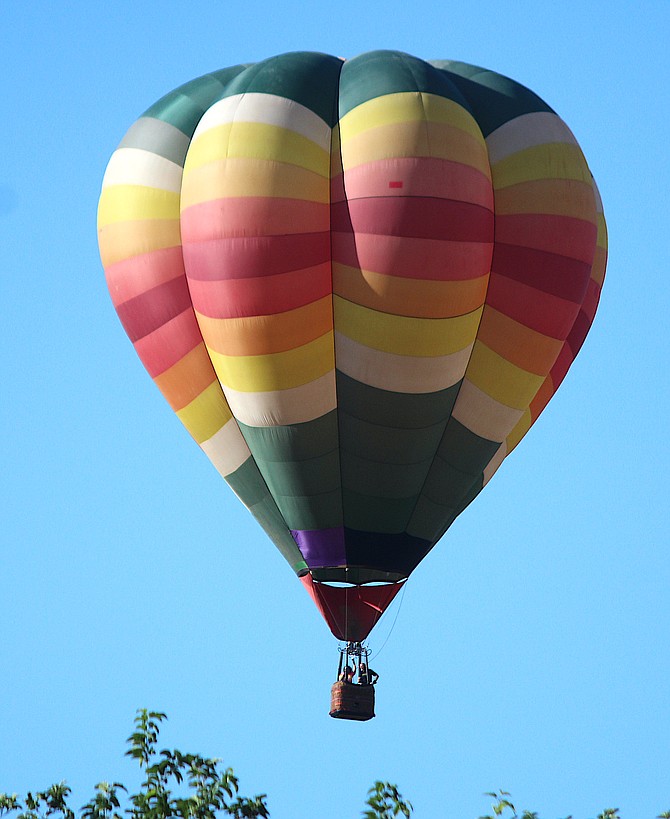 A ballon descends over Gardnerville on Monday morning.
Photo by Kurt Hildebrand.

Genoa, Nev. — Carson Valley residents reported a widespread power bump around 6:15 p.m. Monday that kicked off televisions and air conditioners. Not long before, there was a power outage affecting 1,466 NVEnergy customers in Yerington and a report of a strong thunderstorm off to the east that might have been the culprit.

That power surge might have also been responsible for an electrical fire that resulted in the Chart House being evacuated around 6:45 p.m. There were some folks trapped in an elevator around the same time at one of the Stateline casinos.

A vehicle hit and killed a bear on Highway 395 near Ray May Way around 6:30 a.m. today. The driver was shaken and the vehicle had moderate damage. I had a report that a bear was raiding backyards in downtown Minden over the weekend. They’re out and about and very, very hungry.

I’m aware that a spaceship looking thing rolled through Carson Valley just before 9 a.m. on Monday morning with what looked like a radiation warning sign on the side and a Nevada State Police escort. It was parked along Highway 395 near the Monitor Pass junction over the weekend.

A 4.4 magnitude earthquake at about nine miles southeast of Topaz Lake 1:44 p.m. Monday set off a swarm of more than 50 smaller temblors, only one of which hit 3.0. About 229 people reported feeling it to the U.S. Geological Survey. Fifty-nine of those were from folks on the West Slope. Nine were in Topaz Ranch estates and five were in Gardnerville.

Planning commissioners are meeting 1 p.m. today to discuss allowing a senior living community on the Riverwood property near the county line. You can find out more at douglascountynv.gov

Douglas County School Board trustees are scheduled to discuss a swap of seven residential units in exchange for a 10-acre site in the Virginia Ranch project south of Gardnerville. The school board meets 4 p.m. today at 1126 Airport Road, Building G-1.

It looks like one more day of showers and thunderstorms after 2 p.m. today. Expect partly sunny skies with the high temperature at 87 degrees and the wind 5-10 mph gusting to 20 mph.