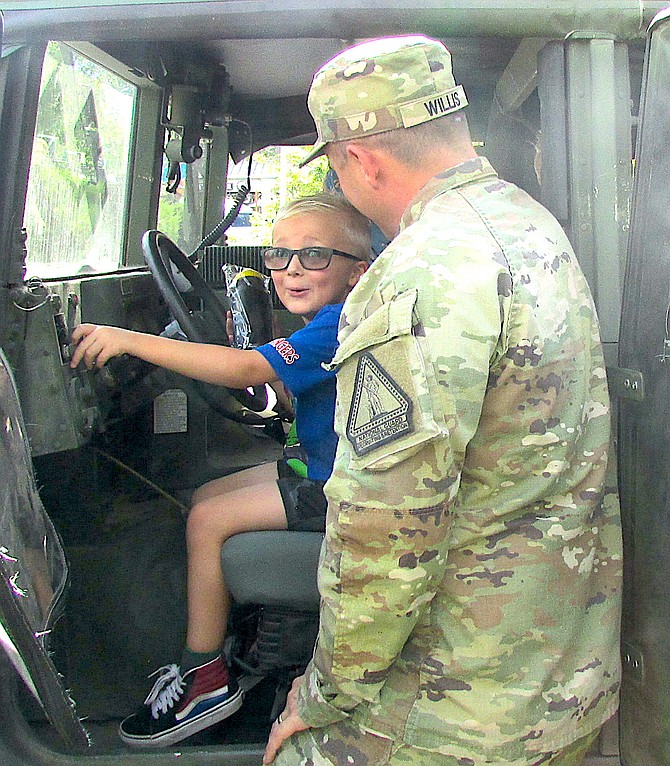 A national event meant to enhance relationships in the community was celebrated for the first time in Minden at the Ironwood Shopping Center Tuesday.

National Night Out encourages neighbors, businesses and law enforcement to come together in a positive setting to build relationships in the community, said Ironwood 8 Cinema owner Russ Levison who steer headed the idea.

Levison said he first heard of the event when he lived in New York and thought it was a good way for the businesses in the plaza to meet and interact with the community.

“We just realized we have this big space in front of the theater and it seemed like a good way to brand it here and get the community together,” said Levinson.

Levison talked with the other businesses in the plaza and Jonelle Spaffrod, manager at Two Stone Slab & Tile, ran with the idea and organized the whole event.

“Russel came to me and said we need to do something, we talked about what he used to do in New York and about the National Night Out and I just ran with it,” said Spafford. “I started calling around to get other businesses involved and everyone was super stoked to be a part of it.”

“We’re out here sharing the benefits of the National Guard to anyone is interested in joining and sharing what we do for the community because that is who we serve,” said Nevada National Guard SFC. Gary Willis.

The Douglas County Library Book Mobile was parked in front Carson Valley Kids and the other businesses and restaurants in the area provided shade and more food and drink options.

Visitors to the event seemed happy to interact with all the different options and services from the vendors involved at the event.

“It’s great opportunity for us to get involved with the community, it’s not often we have the opportunity to interact with people in a positive setting, this gives us that chance,” said Douglas County Sheriff Dan Coverley. “It’s a great event to get the community together and it seems the organizers have done a great job of doing that.”

According to the National Night Out website, the annual event is hosted the first Tuesday of August and is a community-building campaign that promotes partnerships in a community among the police departments, businesses and neighbors. Communities in all fifty states have their own versions of National Night Out.

“It seems to have had a real positive interest here and we hope to bring it back,” said Levinson.