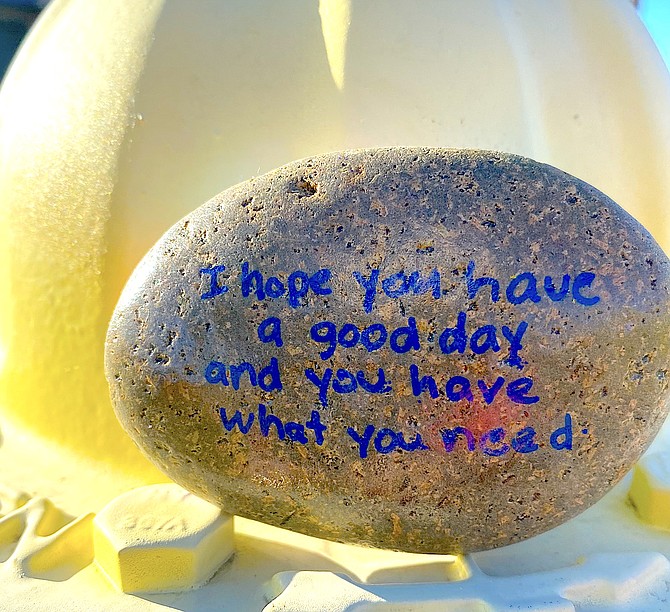 A rock bearing an uplifting message, as found by Robin L. Sarantos in Minden.

It’s amazing the jewels in this Valley. So many beautiful, vibrant items one comes across just wandering down the roads and alleyways behind houses – a bright royal-purple flower, a yellow-breasted blackbird, a kaleidoscope of the rainbow in the wings of a dainty dragonfly searching for her first mosquito of the morning. Then there are the California quail as they scurry across the street a ways down…so busy to get from one side to the other.

But then something out of the ordinary attracts the eye up where Highway 395 and Ironwood Drive meet adjacent to Carson Valley Medical Center. Wonder what the small blue, painted rocks organized in a circle represent? Getting closer, the shiny, indigo formations - all different sizes and shapes – have been placed in a 360-degree pattern.  Within the circle are brightly painted ones. Each rock has a special, uplifting message inscribed over the cheerful paint to bring happiness, joy, and inspiration to anyone reading them.

These are tiny acts of kindness that someone or perhaps several people have placed within the blue circle. The rocks represent expressions of benevolence, of hope, of gentleness — rocks spreading joy — to remind us how lucky we are to live in this beautiful Carson Valley. The rocks are free for the taking and sharing if a particular message brings a smile to your face. These are random acts of kindness to uplift us and be shared with others.

Dr. Noble has a wide range of experience in leadership roles as an educator and in the health care industry.

Janice has been a part of Douglas County and the other rural areas for many years.  She and her husband Neill, and her dog, Quincy, live in Gardnerville.

Please take the time to go to Janice’s website, https://drjanicenoble.com, to check out some of her commonsense solutions to issues important to the voters in Assembly District 39 such as protecting Nevada’s way of life and rural community needs.

Janice will do everything she can to ensure that the people in Nevada will continue to enjoy their right to keep government out of the private lives of its citizens, especially in those matters concerning women’s health. Most important, Janice will represent all the constituents in District 39 by gathering input from those she represents, keeping the public informed on important issues, and looking at all sides of an issue. She will also work with other rural county legislators and legislators across the aisle.

Focus on the problem

Priorities, priorities, priorities.  Our lives are ruled by priorities, those things that are most important to us at the time.  There is only so much time, energy, and desire to solve the problems we face as individuals and society.  That’s why I am so discouraged regarding our elected officials in Washington, D.C. spending so much time and effort on yet another worthless gun control law.  Don’t misunderstand me, the rash of mass shootings over the last few years are both tragic and unforgivable.  How could such carnage be a common occurrence in the greatest and freest country ever?  Part of the answer lies in our freedom, our rights as citizens as laid out by our Constitution.  I understand the “knee jerk” reaction by our politicians to the problem, but another law on the books is no solution to our plight.  When I use the word ‘criminal’ what thoughts pop into your head?  Something along the lines of ‘law-breaker’ should be your first thought.  With that in mind, any attempt through the passing of more laws is obviously only going to affect the ‘law-abiding’ citizenry in America.  Have similar laws regarding our drug problem helped in any way to make Americans safer and more secure?  I think not.  How many have died in the last decade involving a mass murderer?  1,000, 2,000, 5,000?  It has been far fewer than even a thousand.  Now let’s put the problem in perspective, since the opening of our southern border and the influx of illegal drugs on a grand scale, primarily fentanyl, around 2,000 of our fellow Americans are dying each and every week.  Over 100.000 died in 2021.  These are primarily teens and young adults with the vast majority of their lives ahead of them.  Why no public outcry? why no new law to solve the problem?  The answer lies in the fact that these deaths are spread across the country with very little coverage by the media and therefore go unnoticed by the general populace.  A very simple solution is available if our representatives in D.C. will act.  Re-install Trumps border policies. Build the fence and let the Border Patrol do their job.

In my opinion the two biggest obstacles to “Making America Great” are partisan politics and Russian interference sowing disinformation and subversion amongst us. Ex KGB Agent Putin is motivated by what he sees as a humiliating blow to Russia with the breakup of former satellite countries in the Union of Soviet Socialist Countries. Russia was a world power similar to the United States but now downgraded to a regional power. For years Putin and his inner KGB circle have been waging a cyber war to divide us as a country, subvert democracy and most importantly undermine our faith in the legitimacy of free and fair elections. It is manipulation best described as a “firehose of falsehood.” We Americans are constantly being misled by bad actors and the enemy is winning. Republicans and Democrats refuse to even consider compromise. How can we support the First Amendment, freedom of speech, when any Republican who votes his conscience not along party lines is ganged up on, called a RINO, possibly censured or targeted for primary defeat? Second to the attack on the World Trade Center I consider the Jan. 6 attack on the Capitol to be the most horrific event in my life. I served in Vietnam in 1970 as an army helicopter pilot later to retire in 2004 after a MEDEVAC tour in Afghanistan. I feel outraged every time I see the criminals storming the United States Capitol. Violence is never the answer. How can this be political? Many of us took an oath before God “to protect and defend the Constitution against all enemies foreign and domestic.” No exceptions.